We can be sure about one thing though. Apco Worldwide beeing involved in sending email to a few LENR enthusiasts (and Krivit) is a proof that the establishment are keeping a close eye on the LENR development.

Apco IS the Washington establishment in a boiled down format. They are in way bigger than the politicians and the bankers, since their job is to shape/control the public opinion in problematic issues, like climate, health, food, medcare, tobacco and of course defending big corporations against the people in many other different ways. 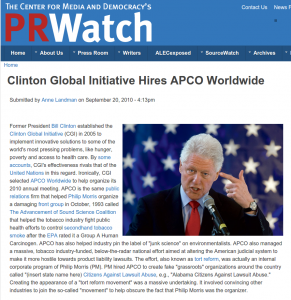 Their specialty seems to be creating fake grassroot groups to make their issues heard… and using the “science” word in fake contexts. Hmmm.

Another thing that bothers me is that they do not seem to make that much money. About $120 million for 630 consultants. That is only $190k per consultant. It’s far from whai I would expect. Ask McKinsey or any hig end law firm. With the kind of clients they advertise and the number of previous political and banking high rollers they have on their paylist, they are either stupid or they are a facade for something else (and bigger) …

So, I’m thinking. Maybe they are not only working for Industrial Heat. Maybe they are actually the architects of the establishment and contracted to write the LENR roll-out agenda. Maybe IH got sort of an offer they cant refuse… Maybe IH has to much to loose to say no to a slower and more controlled LENR roll out. Because maybe Hillary does not want this disruption before the elections (It’s bad enough anyway with Trump) or not all, and Goldman Sachs really need to get out of all their oil commitments first. And since they know, the longer it takes, the more money they will make. They all have the information advantage now. And they will use it. As I wrote three years ago on oilprice.com.

The political and banking establisment does not like disruptions since they thrive on status quo and cotnrol. They like slow progress. And when there is disruption they want to bill the taxpayer. So they need LENR to be slowly integrated in the existing grids and regulated, so that it can be controlled and the taxpayer can be charged the costs of disruption (ie. to the big establishment corps loosing business). And they need to have time move the bad assets off the books to the taxpayer pension and savings funds. 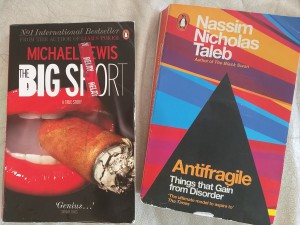 Two excellent books on the theme … It has happened before …

It sort of make sense thinking of the IH letter in this context. They dont deny LENR, but they want to present it as something in the uncertain but somewhat hopeful future.. Certainly not as a 1MW reactor working for a year with COP 30/40/50 or something right now. Apco works for Bill Gates/Microsoft as well, so I believe they like the 10-15 year timeframe.

IH is now part of this carefully calculated agenda that will roll out eventually, but not as fast as it could, and I also believe they failed their mission to secure the Rossi IP and know-how, especiall on the E-CatX. So they play the credibility card instead to slow down Rossi in his mission.

As we have seen Rossi is now focused on Sweden, building a factory, perhaps working together with Hydrofusion and attending the New Energy Symposium.

33 thoughts on “Something Really Bothers Me About the @ApcoWorldwide #LENR Connection!”