Sifferkoll has developed a platform for analyzing selected parts of the Twitter fire hose feed. This includes the complete feed using the Swedish language, all tweets containing S&P 500 cashtags and everything with a relation to the energy market; ie. LENR, global warming, climate change, oil & gas, solar and other alternative energy technologies.

The platform can be used to analyze trends and sentiment in those areas. If this is interesting to you, use the form below to get in touch.

This is what my political sentiment AI algo looked like analyzing Twitter data from the week prior to the election. It actually amazes me how close to the actual results it is. Check the two “sentiment” bars at

the bottom of the graph.

The most important points to take home is that the Sifferkoll AI-algo actually made better predictions of the outcome than most polls. Especially in the politically incorrect realm. Traditional media and polls vastly overestimated FI and MP and underestimated SD. Probably partly because of journalistic bias and their view of good versus bad. We were supposed to believe that MP and FI were active in the social medias and that SD were not, when it was clearly the other way around.

Example of a extremely biased reception in media (DN).

This is an example of how the political opinion has developed between february and september 2015.

And here is an example report for the week ending september 11, 2015 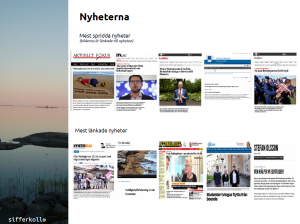 If you instead have an interest in unbiased real time social media analytics you can contact me by filling out the form below.

An experiment in data mining using a twitter live feed to get real time data from the twitter API. Political sentiment is analysed using a proprietary AI algorithm.