Right now it seems also Jed Rothwell is showing disturbing inconsistencies in his comments. He’s been critical towards Penon since the complaint was filed, and have now put in an extra gear.

Seems like Jed is fed selected parts of inside information. Looks like he is being fed select inside information from IH/Apco that he can not talk about. We’ll see. He do not like Penon though even thous his CV shows great credentials working for world class certififacation agencies like Bureau Veritas and Det Norske Veritas, Still he’s going on about this HVAC thing.

This is what I think is going on:

The ERV report shows COP~50. No doubt about. But it is a long report with many details about the meassurements. And many details, gives many ways to insert doubt. Look at Lugano. The Cryptodenialists spent huge amount time thinking up fraud and incompetence scenarios, and since they did not have to prove, only state them, this is very easy. To disprove them is of course impossible. This is the game they want to play now. IH has the report as well.

Maybe they fed some select parts of it to the Jeds, Beenes, Goats, Clarkes and Coles of the net so that they can elaborate these scenarios for them …

What they want now is probably Rossi to release the report. They actually try to game/provoke him to do it, so that they can then flood the place with discussions about tiny details and fraud scenarios (incl especially Penon). They of course can not release the report themselves, since it would be to acknowledge it.

I also seems like Jed is hinting that IH now has a 2nd ERV up their sleeve. I agree with Ian Walker analysis below. 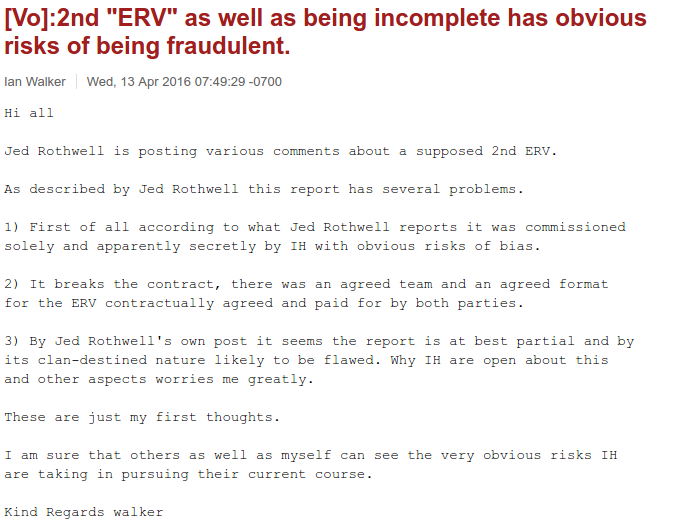 One interesting aspect of this affair is as I have been stating before the Apco Worldwide connection. Even before the complaint and release of ERV results to IH and Leonardo, they issued a press release.

Looking back now everything looks quite logical. They fact that the PR stunt was aimed towards Rossi seems very clear. [link to my analysis]

Also that it was issued with the goal to raise their credibility on the expense on Rossi seems very obvious. Not even mentioning the ERV report or the test fits into this reasoning.

From this release however it does not seem like they were expecting Rossi to file complaint as quickly. They were probably expecting the report to leak though.

So, what can we expect now from the Apco professional trolls?

I’m looking for a couple of things.

Continued anti credibility statements on Rossi, using the “fraudster”, “scammer”, “convicted” words, etc. There is a difference now though, since they cannot discredit LENR as a whole. So we are looking for the trolls that also gives credit to the other IH investments, like Brillioun and Lenuco.

I’ve been searching for these characteristics among comments and so far I’ve found two obvious ones;

1. Brian Ahern. Before the complaint and ERV result he sent this open letter through Jones Beene on Vortex (maybe there is another source).

“Constantly performing a bad behavior and expecting a different outcome is the definition of insanity. The LENR community must recall that Andrea Rossi is a well-practiced convict plying his trade. He has been claiming outputs one million-fold higher than all other LENR efforts. Yet, after six years of such claims there has never been an independent test. A big lie is easier to promote than a small one. The Lugano test in 2014 was perhaps the best magic show of the 21st century. Rossi convinced the Swedish scientists that thermocouples and water flow calorimetry were unnecessary to verify his claims. Those scientists are rightfully ashamed of themselves and have remained silent of the report. They should confess to temporary insanity. Or as a minimum they should offer an explanation for why the wasted the funds provided by ELFORSK. I predicted that the ERV would be a problem. Rossi admitted paying for this INDEPENDENT TEST. Yet he will not divulge:

A. the ERV person

Hoping that he has not fooled us again is a pathetic emotional response to the great impresario. The hopeful LENR folks are enabling the bad behavior. His suggestion of delaying the release until Stockholm is just another delay tactic that he has employed artfully for the past six years.

Full of accusations of Rossi, the Swedish team, and obviously pretty sure that there would no release of information from the ERV …  The today I get this comment:

I communicated with IH. They were never allowed to measure the operation of the MW ECAT. They were not certain that it ever operated at fullpower. Their own attempts at replication always produced no excess energy. Rossi never shared the contents of his system and refused to provide any materials.

So, IH will wlk away with no Rossi IP. He never showed anything and his current patents are an embarrassment.

Unfortunately, Rossi’s machinations have a life of their own and Rossi will become an icon rather than a Bernie Maddorf. The Rossi era has established a new record for the big lie. It has too much momentum to derail at this time.

Obviously Brian has inside information from IH and now there is a different focus; now IH is included as a victim … and in stead of focusing on the Swedes and Lugano, it is all about the 1MW test which he did not even acknowledge ten days ago, even though he had inside information from IH.   Also of course he makes serious accusations not only on Rossi, but also on Penon, West and Fabiano, which are supposed to be paid for by IH.

A dirty game, now including even these men using ad-hominen arguments and fraud accusations.  He fails to mention that IH raised money from Woodford etc. on what they all express as thorough due diligence. Makes you go hmmmm.

2. Jack Cole is accusing Rossi in favour of the IH investments Lenuco and Brillouin. Like here:

This is another silly argument used by Rossi to cast himself as the victim. That patent was filed for on 2/20/15. It took IH awhile to a) figure out that the previous results were questionable, and b) attempt to replicate with better methodology. It also took time for the results of other replicators to come in (with the results of expert scientists being consistent with hobbyist replicators). Of course we have a few tantalizing results here and there that suggest either the results are in error or that the effect is unpredictable and unreliable.

I would almost bet that Rossi pulled the “charges” from the plant when IH said the test was over. The end result is that no qualified scientists can examine a “working” E-cat plant. That way he can say something like, “It was working and I was just getting ready to put in new charges, but here comes the evil IH to shut down the test. It was working well (just less efficiently) before that! Look, I worked 16 hours a day for the last month compiling 12 volumes of how evil they are and I’m putting together a blockbuster chronicle of how this company used me. In the meantime, I’m continuing with my heat, electricity, and propellant thrust making super E-cat quarkX to be produced with a fully robotized plant in millions of pieces per year, F8!” Can people not see how ridiculous this has become? Meanwhile, companies like Brillouin and Lenuco continue working in relative silence to produce technology that may (we hope) actually work. Hopefully, IH will stay the course and continue investing in reputable companies as they seem to be doing.

So Rossi is fake, but the other IH investments are great … Makes you go hmmm.

Of course these kind of statements leaves a lot to explain about patent applications, paid for observers and ERV, etc, etc. Including earlier tests Not to mention the earlier tests that made IH pay Rossi $10M and deliver a plant.  This post also seems really pissed of at the fact that Rossi claims to have the quarkX and Leonardo working on a plant …

Further it seems like commentators that focus on discrediting Penon in person at this point an ad-hominem arguments, like “glorified mechanic” (Jones Beene) have a very thought through agenda. Especially since Penon was accepted by both IH and Rossi for all verifications … Adding to that Jones seems to oscillate between attacking Penon and denying that he is the ERV at all … Hmmm …  Make up your f..king mind Mr Jones… (I guess this oscillation comes from Penons credentials being rather good, wich the Bureau Veritas and Det Norske Vertias connections etc.)

So, very dirty and so very unethical.

I guess Penon is the sacrifice victim of Apco/IH to try and get out of this mess. A

Of course this could be random coincidences, but even if so, my take is that this is exactly what I would expect Apco to deliver in their damage control agenda. The aim is to reduce Rossi credibility and if they feel the need to sacrifice other individuals in the process, they will do it. Regardless their involvement.

It’s getting really dirty. From ignoring and ridiculing the fighting mode has been entered for real.

8 thoughts on “The Rossi #ECAT #LENR saga: What to Expect from the @ApcoWorldwide PR Machine!”