If you want to see an astroturfing live show you only need to visit lenr-forum and read what has been written since this morning, when it sort of stopped 🙂 Have a look at the handles @damn_right_yes, @zenoOfElea, @roseland67 and to some extent @sigmoidal (more of a feeder maybe with biased interpretation of legal docs) running dry to get something going on earlier post by more well known identities of @bob, @thhuxley and @jedrothwell. It is really interesting from a psychosocial perspective.

Please observe that this is not an allegation, but an example of what I am describing below. This is what would be expected in that kind of astroturfing scenario, and that is it. BTW! @PeterMetz have asked nicely to be removed. So be it. @shane_d has asked to be included, but no. I’ll just keep him here in the comment since he sometimes seems to show genuine interest and is kind of a fun guy. (but he certainly isn’t helping the cause)  🙂

Another clue how to spot he players is to search for posts including sentences that anchor the narrative on invectives like “crook”, “scam artist”, “con artist”, “scammer”, etc. It’s JTRIG schoolbook… Repetition…

The last couple of days have been interesting. The Rossi/Gullström report combined with a load of new legal documents have materialized.

One of the most important discoveries is the extent of the IH strategy to sign up the LENR community on NDA’s (and stocks) to keep them in control. Have a look at this list from 214-35: 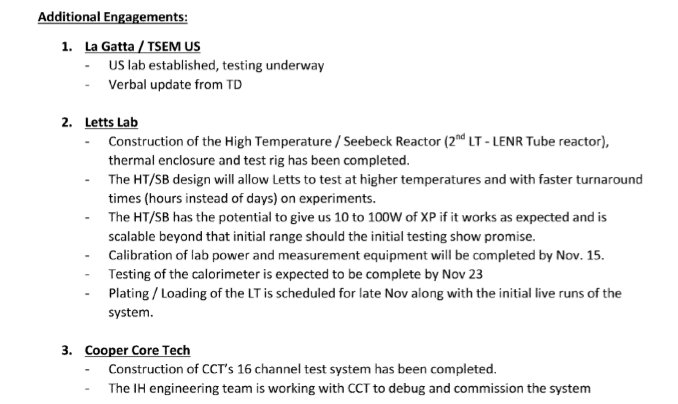 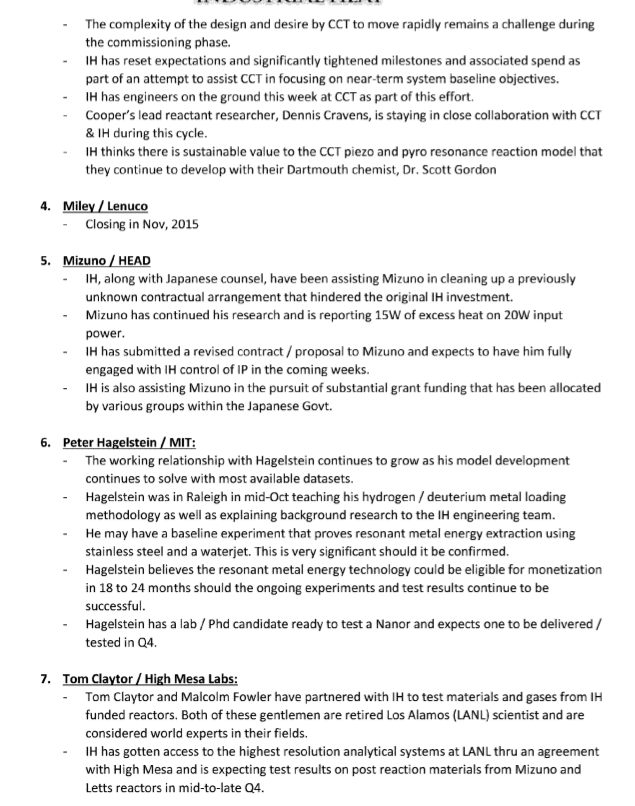 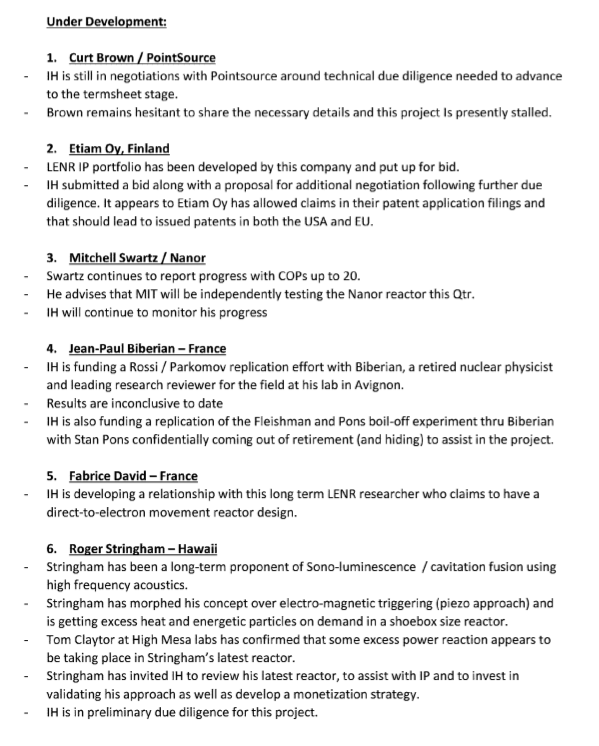 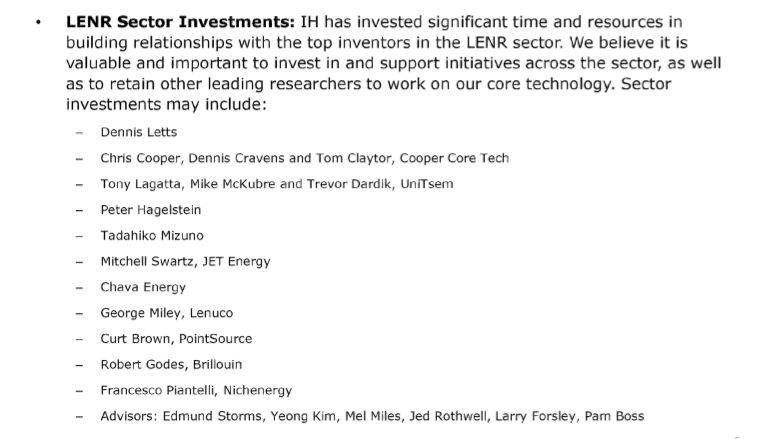 Needless to say everyone above could be considered having strong incentives to trash Rossi in favor of IH.

And needless to say many of these stakeholders are active on the Internet pushing their agenda; openly or anonymously. As we know Dewey (who is not on the list, but the guy signing them up), and Jed are among the most active and angry activists.

Historically lenr-forum.com (together with e-catworld.com) has been the most active site for discussions on the E-Cat and LENR in general. Recently though it has been taken over almost completely by IH related posters (named and anonymous) and in the last couple of days almost everyone making critic against the IH standpoint has been banned. To be fair even Dewey Weaver was banned, but I guess that sacrifice had to be done in order not to seem to biased since he has been a total mess for ages.

And, actually Dewey was not banned by the moral conditioner, Eric Walker, but by the much more balanced Alan Smith. It sure looks like Dewey vomiting all over the place for months was ok to Eric, but when it heated up and the debate was no longer one-sided he had to pull the trigger.

So what is happening here.

There is no doubt lenr-forum has become the number one FUD vehicle of the IH stakeholders. All according to classic Apco strategy of astroturfing:

It is also standard procedure according the the JTRIG handbook offered to us by Snowden. 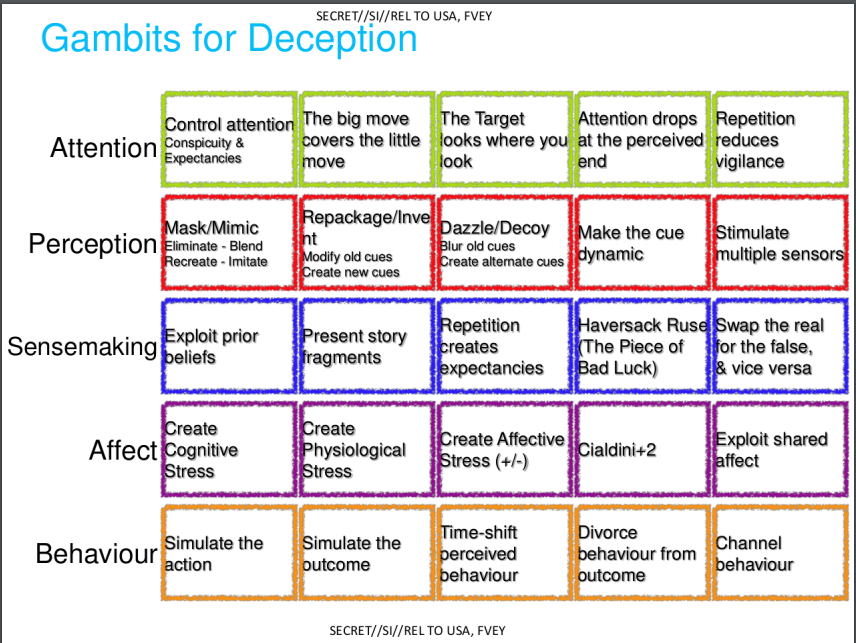 As you can see it is all about controlling the narrative. Moving the focus away from what is important. lenr-forum has become a schoolbook real time example on how to do it.

My guess is that Apco are deploying at least a handful of operatives working on different aspects. Legal, the Lugano report (hello Clarkes et al), measurements setup, etc etc. All with the aim to confuse, diffuse, divert and decept.

But why is this happening?

I’m still a bit confused. Looking trough exhibits 214-23 and 35 the business plan of IH look somewhat genuine. No doubt Apco Worldwide is responsible for the astroturfing (it is core business to them) but is there a larger agenda than simple venture capitalism. There are some indications that larger entities are watching, but acting. I don’t know.

If that is the case it is extremely well executed and Darden is doesn’t really suit the profile being only a mid-range VC guy historically. And Dewey…. He would be a serious liability in any project like this… On the other hand, the attempts to offer opportunities (bribe) Levi to reject the Lugano report through Israeli Intelligence (Mossad?) agents is really suspicious.  Lugano report bashing is obviously important. Even before and during the MW GPT test. And even during the time IH used it for marketing – and now this bashing is a nice fallback – we were stupid, we didn’t know, etc… we were conned… – Playing both sides of the table. Woodford should certainly be suspicious about this behaviour.

On the other hand. I found one indication that it might be as simple as IH not having the money. 214-23 business plan again 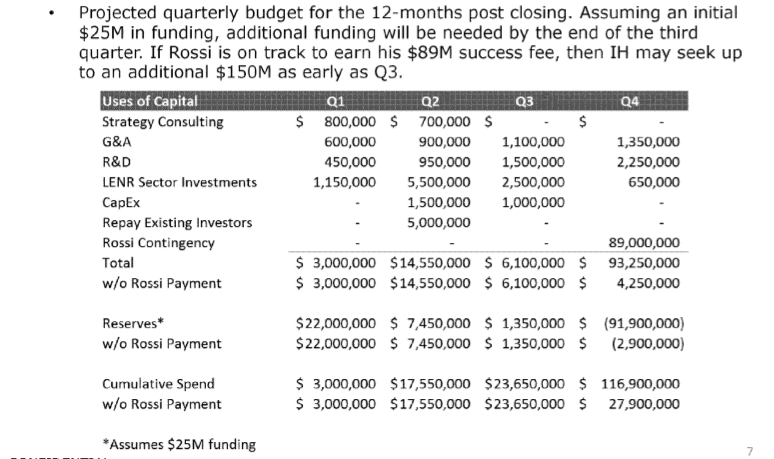 or maybe not. Rossi payments is included, but that line results in a $92M shortage …. This is before the $50M Woodford funding, but anyway. It was way after 2013 when IH nowadays says there was no GPT and that the discussion was only about “maybe paying Rossi some money” sort of.  The exact $89M is pretty clear in this budget though… ie “earning his $89 success fee” is on the table here …

At this point I’m going with the “Was not able to raise the money” hypothesis and is ready to assume that the business plan in 214-23 is basically as honest as a business plan can be. I still believe IH pissed off Rossi during the summer of 2015 when they brought on tons of other investments on who know what promises (loudmouth Dewey probably promised heaven to anyone willing to listen – combined with any number if creative threats if they didn’t…). When the Woodford funding was done, Rossi also got the hunch that IH was planning not to pay (because he knew IH didn’t have the money, only Cherokee is that funded). Ie. he was offered money to stop the test, etc. And IH was to keep the IP in that scenario for peanuts.

Darden did not plan for the lawsuit though. And here we are. Today the fight is about the narrative (on lenr-forum etc). Prior to the trial it is very important for IH to trash Rossi as much as possible and prevent him from doing business in the future. It is probably worth the money paid to Apco for astroturfing. And this is also the reason for IH to worry about the other licensees (Hydro Fusion, etc.) and about the QuarkX. This is the reason that I directly got confronted with that question from self-proclaimed “newbie” @sigmoidal in the forum and the reason for me being banned when I started to examine his behaviors.

30 thoughts on “Why is it Important for Darden/Industrial Heat to take Control of the LENR-FORUM?”