Only to clarify why I do not believe the “hack” hypothesis is that far fetched I’m adding some facts about Deep River Ventures here. I this light the Weaver statement about lacking ability to “hack a typewriter” comes into a wider perspective …

Minutes after this post was published, the brute force wp-login attacks completely stopped. We’ll see what happens next.

It seams that Mr. Weaver is feeling accused from my question about the probability.

I leave it to the readers to analyze these comments by the nick @nckhawk (who has now admitted being Mr Weaver of Deep River Ventures. Friend of Darden and shareholder of IH) on Mats Lewans blog and the response on this site. Among other things he blatantly accuses Rossi for employing a hacker (to make it look like it was Mr Weaver that tried to hack my site) as a response to the question about Namecheap hosting. Hmm. Interesting …

I’m just seeing what you’re accusing me of with your hack posting. Completely outrageous!
I don’t know how to hack a typewriter.

I don’t know where you’re getting this stuff from but you need to start checking sources as well as check your speculation at the door.

Rossi has a known hacker who works for him – you may need to start thinking like criminals think if you care about getting to get to the truth.

You also need to clean-up your blog –  you’ve gotten way off course in this story.

Selected rants by nckhawk on Mats Lewans blog below. Before being revealed as Mr Weaver of IH/DeepRV, he numerous times makes hints for his critics to back off on a personal level … There’s a certain smell to those “advices” and reputation arguments …

Sifferkoll – you’ve made yourself part of a PR war. You need to tone it down so that you have something left of your reputation when the facts eventually come out. You’re being tone deaf with your position these days – take my advice or leave it.

You need to be thinking more about what you publish on behalf of Rossi’s PR war and start working towards a more neutral position. This is not going to end well for Rossi, his fanboys and/or his shills.

Siffer – I saw my name plastered all over the place – was I dreaming?

Siffer – you’re now associating my name with some kind of hack? You’re moving beyond comical and into some libelous territory. Somebody is playing you to be a big fool.

Mats – complex corporate structures co-travel with well-planned entities who plan for and build global operations. There is no news with your updated post other than good bird-dogging. You’d be better off spending time hunting down the tangled web of corporate structures around Rossi, his lawyers, and his current / former employees.

You don’t need hackers and hired propagandist when you have the truth on your side. Rossi has chosen a deliberate path thru the courts in an attempt to buy time to find a possible escape route. He has picked a fight with the wrong people this time and neither time nor truth are on his side. What are the libel laws like in Sweden these days?

Siffer – You are falsely attempting link to my ISP (which is?) with the registering company for my domain name to some kind of hack and think that you have something newsworthy? Why all the noise, fury and blatant lies in defending a convicted felon who has cornered himself while trying to pull off one more con? You are either on a mission or are delusional and obviously have no shame which fits the patterns of some others on the wrong side of this story. I have noticed a pattern everytime that additional unfavorable facts are posted about Rossi and his ruse – notice that he attempts an even grander mistruth / distraction everytime facts that are too close to the bone pop-up. The gig is up for Rossi and his spawn should stay tuned. As you are unable to present any truth around your tall tale about the supposed hack – what will you try next on Rossi’s behalf?

You obviously have one ISP and one hosting company. Somewhere around this time it seams like Mr W is briefed on strategy, and starts to feed new subjects of discussion to the crowd; ie. flow meters.

Argon – how do you know so much about Rossi? Perhaps you should ask him about the flow meters that he replaced instead of the ones that IH spec’d and installed when the 1MW was built. That one is going to hurt when the truth comes out in court. The gig is up – the world is not going to wait for any more demos. The Lucy Peanuts football trick is played out.

Interesting. Mr Weaver here acknowledges IH had a influence on which flow meters were used already at the start of the test. To insinuate that they would not be aware of these being replaced (for any known or unknown reason) during a full year, with their employees in the plant everyday, is ridiculous. Maybe this is what was referred to as “busted in attempted deception”. What it proves to me is that IH knew exactly what was going on all the time. This only strengthens the case of IH fraud. Any other explanation implies endless stupidity from the IH side.

Mats – Siffer prints my name and incorrectly accuses me of being a hacker using your website to promote his while Rossi safely uses your blog to try and sustain his ruse. My comment had nothing to do with Maryugo and is directed at Argon. Perhaps Siffer should use his “skills” to try and find out who Argon really is – the syntax “somehow” seems vaguely familiar doesn’t it. A drip-by-drip release of some additional mundane facts might be the best treatment for Rossi and his ilk while he awaits the tactical nukes that await him in court. For Argon to slander Marianne Macy is beyond anything I’ve read or heard yet – do you support what Argon wrote about Macy?

I fully believed Rossi after first meeting him, studying the Ecat and reading the test results. We all did. It was only after replications attempts failed to produce ANY results that the doubts began to creep in. IH didn’t want a 1MW reactor but Rossi insisted. IH offered substantial sums of money for Rossi to produce 10 watts and / or 100 watts of excess power from a single characterized and verified reactor as an alternative to the insanity of the 1MW test. Rossi would have nothing to do with it and insisted on a 1 year, 1MW test. He shipped out from Raleigh to Miami and it went down hill from there. That’s about all I can say on this for now.

This one is interesting since it strengthens my theory on IH not wanting to perform the 1MW test they agreed upon. It makes a lot of sense, since IH already had the IP and license agreement. They had no upside in a 1MW test being successful, since it would both make them pay, and raise Rossi credibility enabling him to compete on other markets with superior product. Better for them having Rossi working on a non industrial scale reactor, that could more easily be hidden in FUD and fraud scenarios. Very logical.

Also the “replications attempts failed to produce ANY results” is very interesting. It sort does not fit with any IH actions we know about, like filing patents, and raising money from Woodford and others.

Some of you folks are so single-minded that it is beyond stunning. Rossi has sunk a hook so deeply into your jaws that you may never recover. Has it occurred to some of you that LENR is moving forward with projects other than your soon to be ex-hero and overlord? Perhaps it is time to start questioning IQ and / or do some type of mind-control study around this neck of the woods.

Having said that, the present reviews of steam flow and flow meters are very good preparation for when the Penon report gets released. Or you can take advice from the man himself in a 2011 interview with Krivit – a boiler mechanic will be able to do the calculations.

And here we get confirmation on current strategy to leak selected parts of the report (no big pictures of course) to certain pathoskepts/cryptodenialists that are working on diverse fraud scenarios on behalf of IH. As I said many times, it is easy to invent scenarios, when not needing to prove them.  Mr Weaver has a small problem though since he has already said that Rossi was “busted in attempted deception” with flow meters at the start of the 1MW test. This indicates IH known about this all the time … Think about that for a moment.

The IQ and mind-control arguments are also interesting from a completely different point of view … Especially since we now know exactly Mr Weavers position in this story.

Unfortunately, Penon removed the flowmeter details from the final report that was sent to IH and Rossi. Not to worry though, he had previously included those details in the drafts and IH was also able to gather more information re the flow meter from lots of pictures during final report inspection day. The truth is secure.

So. Very. Unfortunate … Now we’re not talking about the report anymore, but some possible fabricated “draft” that neither Penon (the agreed upon ERV) or Rossi has acknowledged. It could be anything,Ie. pure rumour spin or imagination. And since we have no idea what the pictures show, this means nothing. That said. Something here is spinned wwith the purpose to fabricate fraud scenarios.

Mr. Weaver obviously accuses both Penon and Rossi of deliberate fraud … Because IH has nothing else. Only ad-hominem.

Overall all of this indicates strongly my theory on IH strategy, being to relieve Rossi of his IP without crediting him and then flush him out as a failure. At least this is what it turned into, when IH deliberately tried to prevent the 1MW test happening. This is now confirmed.

We can now expect random details out of context to be realeased by Mr Weaver on regular basis for everyone to speculate about to move focus away from the big picture. This is standard troll procedure. As I said and Mr Weaver confirmed by his actions this was not the original plan. 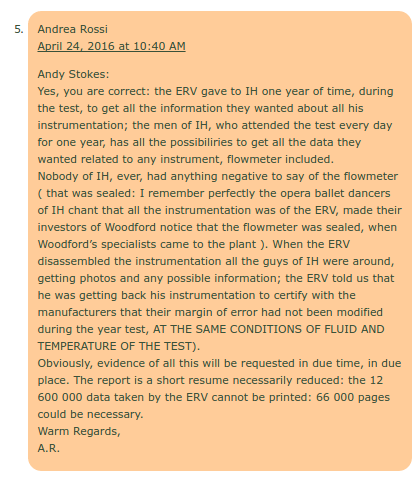 Most important question remains. What about the IP and the agreement. If Rossi is what Mr Weaver accuses him of, then these are utterly unimportant.

So. Mr Weaver. Do you want the agreement to be valid or not in the future? Very simple question.