Oops. Seems my predictions were a little off. Please read Mats Lewan Interview of Rossi and the full settlement, including hilarious notes on the so called “experts” Smith and Murray 🙂 Brilliant.

Rossi got everything back including the American, Russian and Chinese markets. IH/Darden is out of the game. HUGE victory.

First some reflections on the Rossi-IH settlement. Dewey disappearing into the void was sort of predictable. When there was nothing left to gain for him making his “thing” he launched into another unknown orbit … Hi did what he was paid for and that is all there is to it.

Abd and Jed are both a bit more complicated. They both probably believe they are doing the right thing, but on limited information – need to know basis. They have probably been played. Jed has serious problems with Rossi as a character but I think it is starting to dawn on him that Rossi and IH made some kind of deal and that the whole affair is not black and white. We will see him scale down and focus in LENR as a whole. It is already happening. His issue with Rossi are mainly personal.

Abd also seem to come to his senses to some degree after visiting Miami. I believe he is starting to realize that the E-Cat QX actually could be real (since Darden seem to do so – Abd probably noticed this in Miami when meeting him) and that it is in his best interest to adopt this possibly-real-QX point of view.

Here are some predictions on the settlement.

That’s about it. It needed to be simple to work.

And now back to the real enemies of LENR. I believe there are four major ones.

So what strategy will be used. Mainly FUD and uncertainties. And as much as possible to disrupt anyone trying to take the technology to the market … and to silence those voices that reveal this obvious agenda.

They will try to stop any R&D and if not possible they will try to contain it in small controllable institutions where they control financing, and they will ensure it will make only small or no progress.

On LENR-FORUM these opinions are mainly represented by Mary Yugo, THHuxley (Thomas Clarke) and of course the subject of this post, Eric Walker. And their small army of sock-puppets … Since the IH settlement there are some signs of confusions and they need to regroup and start to criticize IH as well if it would turn out (as I believe) that they are still in the game with Rossi to some degree.

As I wrote in previous post I’ve been banned by the moderator-at-large profile of “Eric Walker” at the LENR-FORUM. Recently it seems that Eric expanded his search and is banning every account that is questioning the agenda and arguments of the other accounts there. All accounts that show somewhat similar “mannerism” as me are directly banned on “mannerism”  ie. questioning motives … (ISP and timing are also used, but since I know I use only Telia and Telenor, which are maybe the two biggest Scandinavian national ISPs with many millions of user that is of course BS. ) 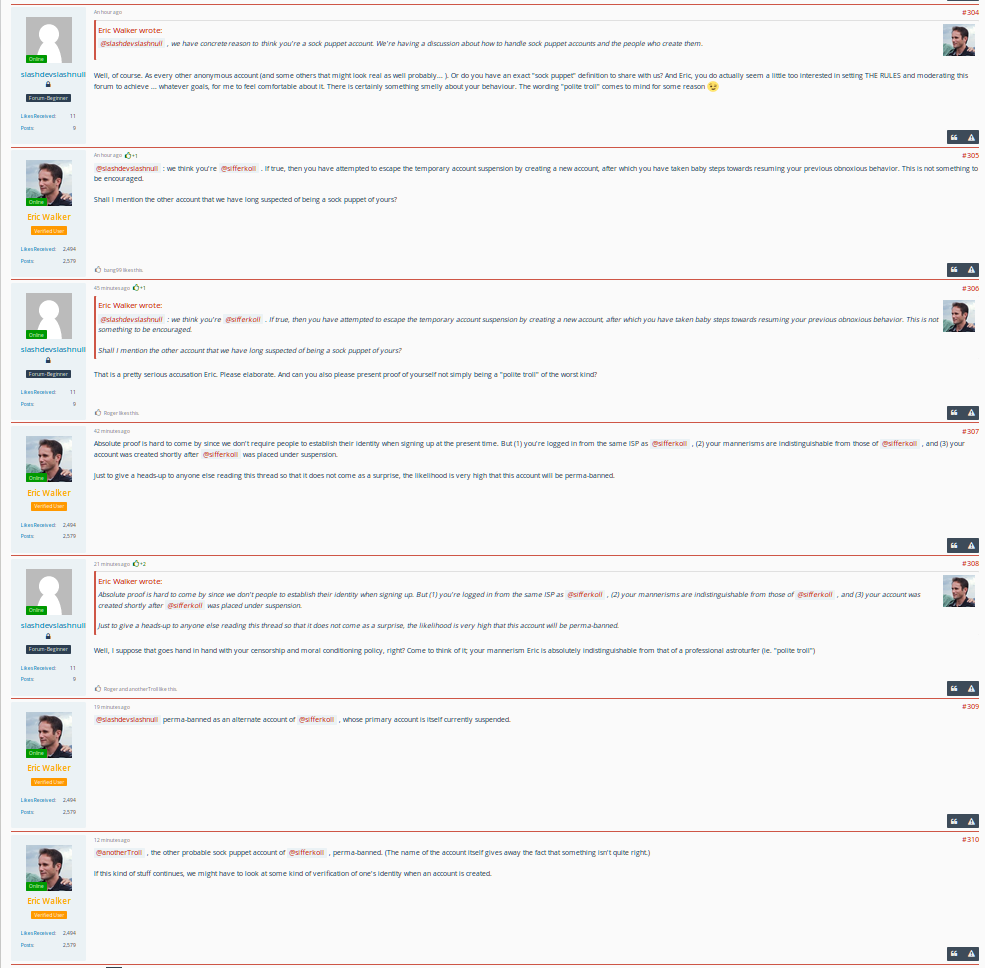 There seems to be no doubt anymore than Eric executing an agenda of some kind that suits the COINTEL astroturfing manual extremely well. Read this again on forum moderation.

One indication of this agenda is allowing the well known pseudo skeptic @maryyugo profile to post as well as allowing all possible ad-homs, defamations and attacks on Rossi. And maybe most importantly always promoting the FUD line an any argument and never allowing any discussion of the motives behind FUD postings. All these posts are redirected out of context immediately and the posters, threatened with the “mannerism” argument, suspended  or banned to keep the discussion on the LENR-PC corridor.

All this is schoolbook astroturfing. We have yet to find out though which organization Eric represents. I guess it is possible he represents himself only, but his very vague profile (that seems to exist only to make him seem to exist) points in other directions. Most probable is maybe some US gov/edu entity or some religious fundamentalist organization (the Islam/Bahia connection on EW Linkedin).

Keep you eyes open for signs … there will always be markers that reveal the operatives.

8 thoughts on “Do We See even more Indications of Eric Walker being an Anti-LENR Astroturfing Professional?”