Rossi and IH settled in court. Everybody smiling. Maybe a win-win deal made. Huge success for Rossi E-Cat and QuarkX technology. 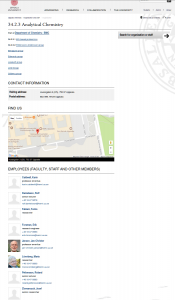 No other person has the hands-on knowledge / experience of Fulvio Fabiani when it comes to working with LENR and the E-Cat.

Except for Rossi himself no other person spent more time with the E-Cat during the 1 year GPT. After the test was finished and IH did not honor the contract with neither him or Rossi it looks like he moved to Uppsala to work with the Uppsala team (Roland Pettersson is in the same department).

Link to department of analytical chemistry at Uppsala University

Random commentators like Jed, Abd, TC / THH (incl hitman Weaver of course) plus various contracted astroturfers on the forums have been whining about the Uppsala team not wanting to engage in debating their FUD. In this perspective it is certainly refreshing to see that they have chosen to work directly with Fabiani (who actually have some first hand knowledge about the subject) instead.

The Mats Lewan Fabiani interview is definitely worth reading again.