The Weaver continues to deliver confirmations on LENR-FORUM.

Frank – Just to be clear – Rossi sold territorial rights to his Ecat IP including derivative rights for $11.5M. No additional money is owed by IH – the rights are purchased and Rossi has an obligation to fulfill his side of the contract – apparently a very difficult thing for him to understand. Rossi may get to make his case as to whether or not he earned the additional $89M for the 1 year, 1MW test. At a minimum, IH will be coming at him with a professional and comprehensive defense. Claims of a passing a successful test in exchange for $89M require a standard of integrity that Rossi has yet to achieve in his lifetime. We’ll see whose standard holds up the best in the judicial sunshine.

Again. The ERV report says what it says. Penon was agreed upon as ERV. If the report says COP~50 IH should pay. So far there has only been ad-hominem attacks, FUD rumors and conspiracy theories hinting on a this not being the case.

Since IH didn’t pay according to the agreed upon contract without even mentioning this intent, the contract is invalid and Rossi has no obligations whatsoever. Rossi’s being suspicious of IH intent during the last months of the test seems well founded. Temporarily withholding some IP, since there there are no time obligation on this delivery, seems like a very reasonable action from his side.

It is very interesting though, Weaver again changing focus from the MW test results to Rossi IP obligations (incl. territorial rights) … As I’ve been saying; this is the core of the whole saga.

Everything points to IH trying, but miserably failing, to use the “not paying” card in the IP negotiations with Rossi.

A little surprised to read this revealing comment by the Weaver this morning. He has been hinting it before, but now it becomes really obvious. This story is not about the MW Test at all, but all about IH stating that Rossi did not deliver all the IP according to their view of the license agreement. [lenr-forum link]

Shane D – I appreciate your attempt to clarify and don’t understand the confusion. IH has a paid up license to all ECat IP in the licensed territories. The IP hasn’t been transferred yet which may be remedied if one of Rossi’s Ecat reactors can be verifiably and successfully demonstrated/transfered to the satisfaction of IH. Rossi has a contract issue if he continues to fail to deliver on that $11.5M commitment / obligation.

The 1MW test is a separate matter. Rossi has imagined that he has succeeded in proving that his 1MW system has sustained a certain performance level for 350 out of 400 days with a fake customer and compromised measurement and data systems. There are numerous discrepancies, errors and deceptions on record. That list actually continues to grow. Rossi has claimed there is a legitimate legal dispute there and he will soon become more educated and aware of the IH response plans.

Main point here is Weaver seperating the issues of IP from MW test. He clearly sees Rossi having contractual obligations. If he for one second thought those were worthless (incl results of test), why bother at all?

In this perspective it is very probable that “substantiate” does mean IH not being able to get COP~50 (probably they got COP~11 which they tried to patent), and certainly not having all the new EcatX IP …

IH was probably trying to use the ERV report of MW test payment as basis for NDA covered negotiatons, but failed.

As I said some time ago. For Rossi this is not about the money. Not even the $89M. It is about IP control and 50% of the world GDP market.

From my point of view this is now all about Leonardo (incl Hydro Fusion and maybe some smaller licensees). The IH contract is not valid anymore due to IH failing to pay and trying to steal IP. This will take years to settle, and during this time Leonardo and Rossi will continue to develop IP and products independently from IH. They will have to develop the inferior products from the IP they got before they breached the contract.

Below a new map showing possible E-Cat technology licensees. Some areas are unknown (since there are no confirmed buy backs), like France/Benelux, Switzerland and Slovenia. Due to IH stupidities their former territory is in limbo and will probably be underdeveloped short term. Focus will be on Europe and Leonardo in cooperation with Hydro Fusion. 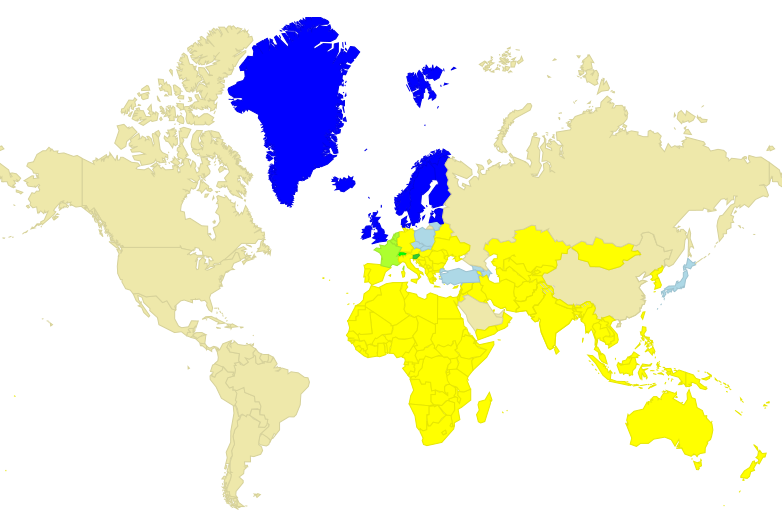