I’ll take the opportunity here to link to a discussion on  EGO OUT by brilliant fellow LENR analyst Peter Gluck. 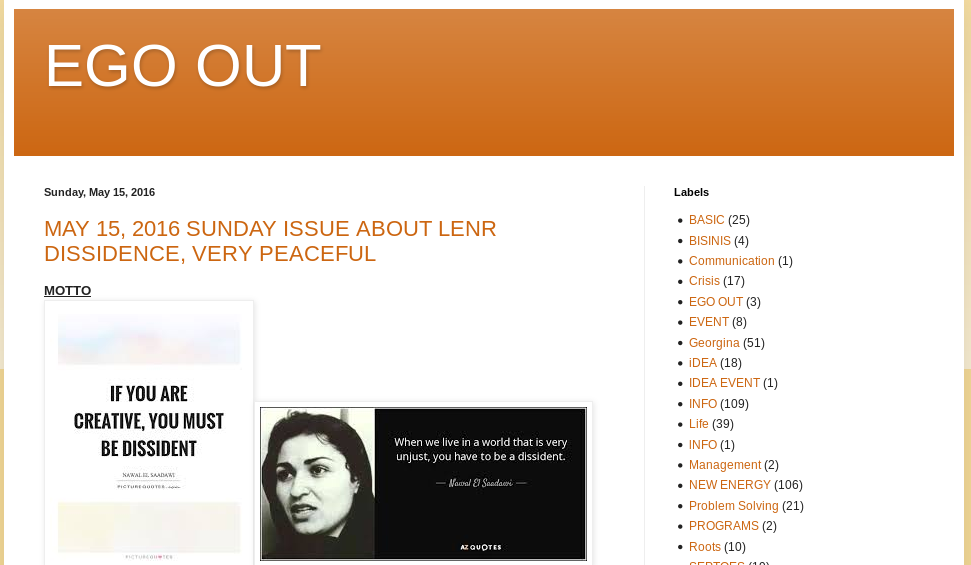 These lines by Jed Rothwell commenting Peters point of view on the E-Cat story almost caught me breathless.

You have too much experience with oppression. Living under communism, you apparently never learnt the lessons taught to small children in democracies, that a person must ALWAYS give both side a chance to speak before deciding who is right.
You are conducting a sort of communist style kangaroo court where one party (I.H.) is declared guilty before they get a chance to speak in their own defense. You have no idea what they have to say, but you are sure it is wrong!

Not to mention Jed’s earlier rants, all of them using his perceived authority on the subject as prime a argument; be it labeling more or less everyone with an Italian name a idiot or fraud, or sharing his immense trust in some imaginary IH entity view on the MW test, etc.

What Jed totally misses is that if there is anything to be learned from living in former communist dictatorships like Romania (actually it is true in semi communist countries like Sweden as well), then it is to NOT trust anyone using any kind of authoritarian (listen to me, I know better, I have more information, bla bla.) type arguments.

And in this story all these kind of arguments comes from one side – IH. Even in their press release, this was all they said … think about it … when someone carefully says – trust only me – on faith only, does that increase or decrease credibility? All they’ve done so far is to very vaguely state they have not received all IP needed to substantiate Rossi’s claims. And then they furiously spin FUD, ad-homs and fraud accusations through their paid and unpaid cryptodenialists using some kind of authority as argument. This comment was directed at Peter as well. Here besserwisser Jed is making multiple headspins …

I know enough information to judge these things with confidence. You, on the other hand, know nothing about them. All you have to go on are Rossi’s assertions from his blog.

Yeah! Sounds really convincing, not like spin at all … Very reliable … Really?

Another Jed example directed at me:

I do not think you should take sides in this argument between Rossi and I.H. until you have had a chance to see what I.H. says in response to the lawsuit. It is a bad idea to pick sides when you have only read what one side has to say. There is a great deal about this situation that you do not know.

If Rossi is right you will have plenty of time to attack I.H. later on. If he is wrong, defending him will not do him any good, and it will make you look like a fool. I advise you to suspend judgement and wait.

Jed has here taken it upon himself to keep us quiet and to not defend Rossi before the trial. To keep everything calm … To not look into the immense inconsistencies and backpedaling from Weaver and fellow spinners. Who could benefits from this do you think? Just asking …

Finally, to be absolutely honest. Someone trying to give me advise this authoritarian way instantly sets all my alarm bells off.  There is absolutely no single way a comment like the one above can be honest. If anything, Jed is confirming IH spinning BS.

Last note about human judgment and understanding Rossi’s world class endurance and perseverance. Imagine yourself running close to 438 laps on a 400m track during 24 hours and then having your shoes carefully cut off by a doctor … Does this come forward to you as a person who cheats, defrauds and cut corners?

If you do, do what Rossi did first, and then we talk again.