It sure looks that way reading the probably very expensive @JonesDay motion to dismiss Rossis complaint.

This can only be interpretad as a dirty legal trick with the intention to steal Rossi E-Cat IP.

… That delivery, Plaintiffs allege, occurred in August 2013: “In or around August 2013, the E-Cat Unit was delivered from Ferrara, Italy to IH at its facility in Raleigh, North Carolina, where preparations began for the final Guaranteed Performance Test.” Compl. ¶ 59. Plaintiffs’ purported Guaranteed Performance Test, ”however, was not commenced until “on or about February 19, 2015” and not “concluded” until “February 15, 2016.” Id. ¶¶ 66, 71.

The Complaint alleges that the Second Amendment to the License Agreement (“Proposed Second Amendment”), which is attached as Exhibit D to the Complaint, “formally eliminated the requirement that the Guaranteed Performance test period be commenced immediately upon delivery of the plant and instead requiring [sic.] that the Guaranteed Performance Test period would commence on a date agreed to in writing by the parties.” Compl. ¶ 62. The Proposed Second Amendment, however, clearly states that “[t]his Amendment may be executed in counterparts, none of which need contain the original signatures of all Parties, provided that one or more counterparts collectively shall contain the signatures of all Parties to this Amendment.” …

So, IH knew already in August 2013 that they were not going to pay Rossi anything by using these legal tricks of the 2nd amendment. Instead they deliberately kept Rossi in a tight leash to steal IP and delay E-Cat / LENR roll out

Hopefully Rossi now have the opportunity to continue product development as stated in the recent press release. 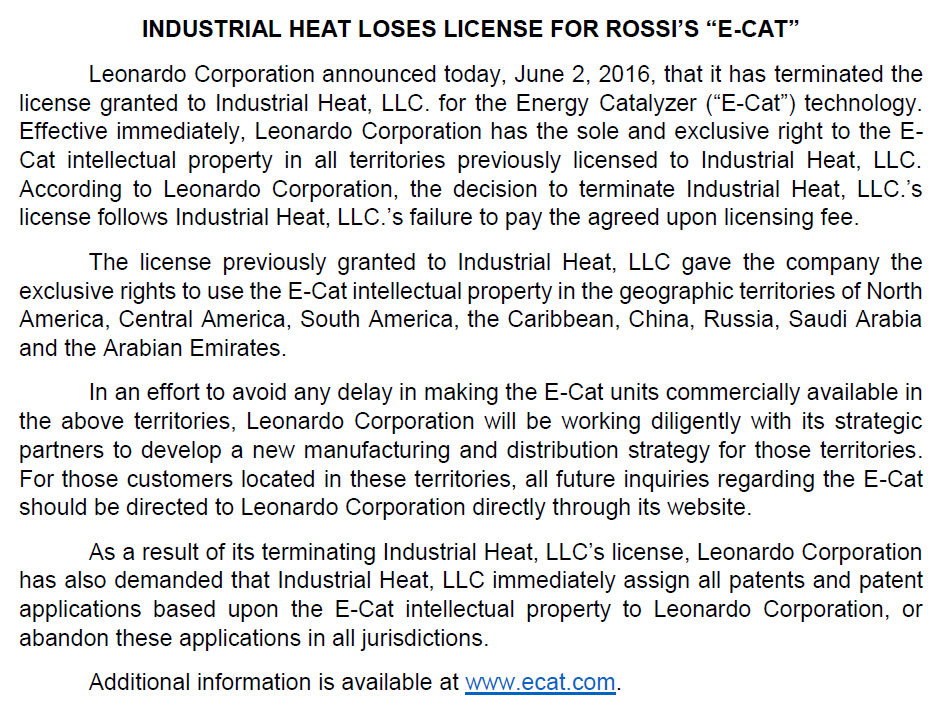 2 thoughts on “Does IH Admit Delaying the MW test to Steal as much E-Cat IP as Possible With Legal Tricks?”