With our friend Dewey Weaver only peddling uncertainties, slander and FUD on LENR-FORUM we do need to look for IH representative Fred Zoepfl on the prime anti LENR astroturfing ecatnews website.

Taking a brake for a week the Fred operative has been activated again and he has some important information about the IH plan going forward.

This second tier is the one going to be used in the so called “counterstrike”. This I described in my last post about Fred here  and about going F&P 89 again here. and to ditch LENR completely here.

Back to Fred. About him we must know that he has strong personal interests in status quo and the AGW agenda, since both he and his wife, Melissa Zoepfl make their very lucrative, tax funded living in the alternative energy/NGO/gov consulting business. Melissa is a VP in the non-profit LMI.org  and NOBLIS. Both these organizations are extremely dependent on tax dollar funding, and a lot of it is connected to alternative energy, etc

Fred talks about himself as a physicist and goes about bashing LENR in general terms with, as we know by now, basically nothing to back it up.

In reality though he seems to have no current and relevant experience that would give him any credibility talking about LENR from a physicist point of view. He seems to be simply a nobody in this area.

He is however involved in the alternativ energy business, as his wife, as some sort of consultant. This we can see here BERA – Biomass Energy Research Association. Of course, an organization like that is also dead meat in a LENR world. Fred also seems to have written a few very minor reports on biofuels that can be found using google. His linkedin profile is mostly dead, showing only old stuff. He obviously does not want to show who and what he is working with. How strange is that?

However there is a reference to a Phoenix Inc on LinkedIn and there is a (3) Phoenix Inc company close by Ashburn, VA. with co-founder Joseph Murrey, who is rumored to be a primary IH consultant (chief scientist?). So there we have another highly possible connection between IH and Zoepfl.

Apart from that we already know that Fred released information on the $11.5 payment to Rossi before this common knowledge in the complaint. So I would call it a clear indication of Fred Zoepfl being paid by IH to slander Rossi.

So lets have a look at what Fred has been up to lately as a IH operative. Note firstly that the language has changed dramatically. From being all into ugly words and accusations, Fred now knows he is being watched as the person he is … Huge difference.

He starts out by a plea for everyone on ECN to send Rossi slander to his lawyer.

And then he try to explain the narrative of the MTD. He is playing it down as lawyer “word salad” at it’s best (which is hard to deny …) and keeping out of the real issues. 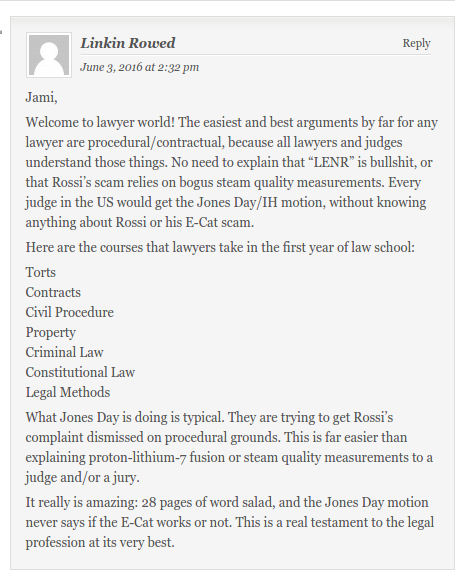 He is actually defensive. I’m not sure if he is actually peddling a settlement on behalf of IH. Difficult to say. He plays down the “counterstrike” scenario. And I think this is correct, since they know it is not a scam. It will be hard to prove a scam if there is none, and very risky to try, since they know Rossi can disprove them with a working quarkX. Fred seems to have reached this conclusion during the last week… 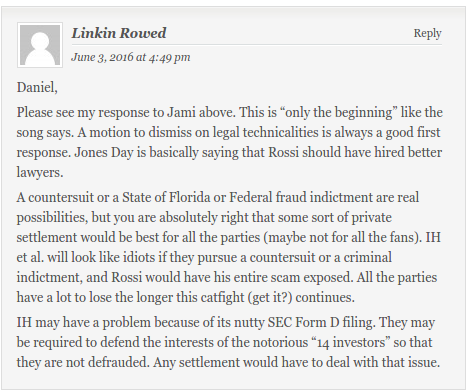 He still leaves the door a little open though. But mostly as some kind of hypothetical threat against Hydro Fusion. Roger Green, as we know – but apparently not Fred – is not involved anymore. 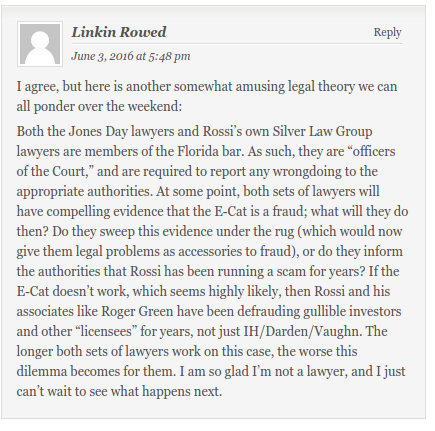 It is becoming more obvious that IH, thru Fred, is increasingly worried about Hydro Fusion, since they are mentioned again. Making even more threats, although on unclear grounds. As we read above Fred is backing off the counterstrike scenario as too rusky. 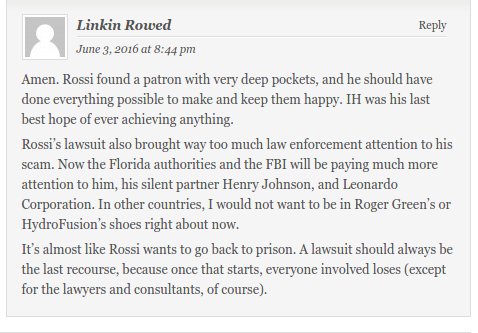 Here he talks about the non existent fraud case again as some kind of threat. But looking at previous statement it seems like he is using this as ONLY a threat to peddle a settlement … Interesting. 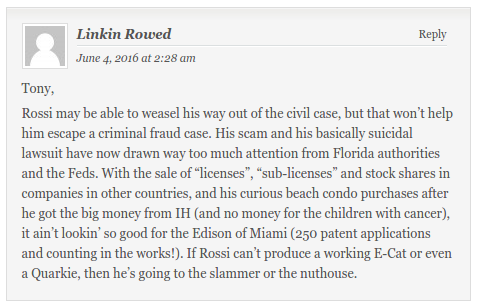 We should also note what Fred is absolutely NOT talking about. And that is the ERV test showing COP ~50 with only pathetic Weaver FUD as counter arguments. The MTD was painfully written so that it did not need the enter that area; only as a FUD footnote …

The sacrifice being that IH needed to admit they knew since August 2013 that they did not need to pay for the one year test on a legal technical matter (that is not a sure thing either).

The conclusion is that IH knows that the best thing for them is to settle and Fred is assigned to do the threatening right now. And he is involving Hydro Fusion in twice in his comments. That shows what is worrying IH the most.