There is so much interesting information reading between the lines of Angry Freddie’s comments on ECN. In a almost normal past at the end his three month full time assignments to do as much ad-hominem character assassination on Rossi as humanly possible (I believe he set a new world record…), he produces this.

[May 19] Woodford will try to hang this on IH because they invested in IH, not directly in the E-Cat. IH will claim they are amiable dunces who only wanted to reduce “air pollution,” and “they was robbed” by a clever fraudster. IH will claim that they only raised money from Woodford, the Chinese and others because they really and truly believed Rossi’s bullshit. After all, they are “businessmen,” not engineers or scientists. As to their lack of adequate due diligence, hey, they trusted in the Rasputin of LENR.

[May 23 (final Zoepfl post some days later)] This is just more stupid rich guy follies. $50 million or $100 million is nothing to these guys. The only reason Woodford invested in IH is he’s best buddies with Darden. Even if Woodford and IH get nailed for their cold fusion/LENR indiscretions, it would only be a slap on the wrist for them.

This is interesting, since it clearly hints IH is worried about Woodford. As they should. Ever since the March 11 press realease the IH/Apco strategy executed by Fred Zoepfl on ECN and Dewey Weaver on LF has been to discredit Rossi in every way possible. This strategy was also clearly stated in the Apco press release.

The strategy has a flaw. There is one entity way bigger and way more credible than IH – and that is Woodford. They have done serious due diligence on new technologies for ages. And IH knows that Woodford knows that the ECat works. Here Mr Zoepfl outlines the IH exit plan; pleading plain and eternal stupidity.

However we know, that Woodford due diligence team visited the MW plant several times when running. And so did the Chinese.

[May 21] A settlement would be the best outcome by far for all parties in the civil lawsuit fiasco. What would have been even better is a “binding arbitration” clause in the idiotic Leonardo/IH “license agreement.” Then they wouldn’t be airing their dirty laundry in public.

From the Rossi PoV the publicness of this whole affair is of course great, since it brings out the “dirty laundry” in this case personified by our new friend Mr Fred Zoepfl. It seems that he was taken off the air after the last statement about Woodford.

I’ve been looking for the missing link and found it.

It has a name: Fred Zeopfl (incl handles “fredz777” or “Linkin Rowed”) – a former nuclear engineer of sorts (navy in the 70’s?) but mostly involved in the biofuel/biomass tech industry with some random consultancy assignments. Probably looting AGW tax dollars as some kind of fringe lobbyist in Washington. And now a troll (of the evil kind)… From what can be seen, Fred has had nothing to do with nuclear physics in 40 years, still he likes to paint himself as an expert … (see below)

But that is not important. What is important however is that he was so promptly activated on the Ecatnews forum with the handle “fredz777”. I’ve missed him before since I really never bothered about the MY infested ECN site. But it really is interesting to follow the writings of this … well … He’s sharing our friend Abd’s fascination for psychiatric diagnosis …even quotes DSM at times, so lets call his  ACD (aggressive compulsive disorder). I can think of worse ones; he pretty much comes forward as a general creep and a f…ing a..hole fueled by pure hate (is that a diagnosis?).

Fun thing is, I found him since of some reason posted on sifferkoll where with both the handle (which I suppose is meant to be anonymous, otherwise it would be a Internet harakiri…) and his name. He actually took care to post through a proxy in France. Don’t know why though… As you can see below he changed his handle afterwards to “Linkin Rowed”.

From using his real name when making comments on different forums, incl ECN and on Disqus he went incognito… and was activated as before with this “fredz777” handle he emerged on March 8 (two days prior to Apco press realease…) with the following rant, where he establish his total anti (against the law..) LENR agenda and his “credentials”. He also points to his naval experince from the 70’s … 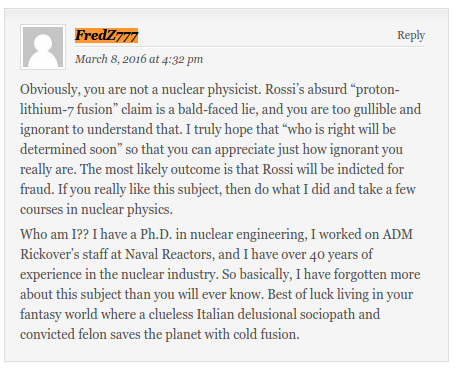 He then goes on in absurdum bashing Rossi and everything in Rossi vicinity. It would be boring to show the several hundred aggressive posts he managed to produce. You’ll just have to visit ECN and search for his handle. Some things are interesting though. Already on March 10 he stated the exact $11.5M that Rossi was paid. Long before this was public. This I would say proves he has serious inside knowledge and is most certainly contracted by IH on this trolling assignment. 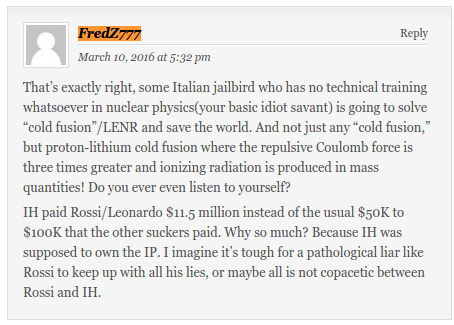 And if you ware curious on IH current view of their other investments. Check this out (Miley) : 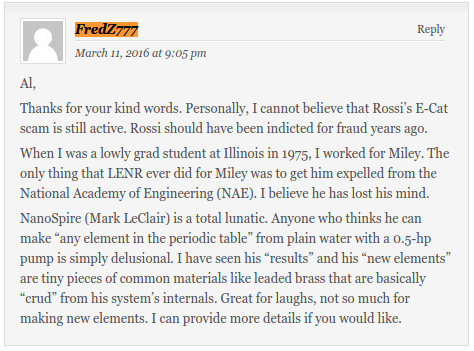 It seems he has also actively worked to get the test closed down by contacting authorities. 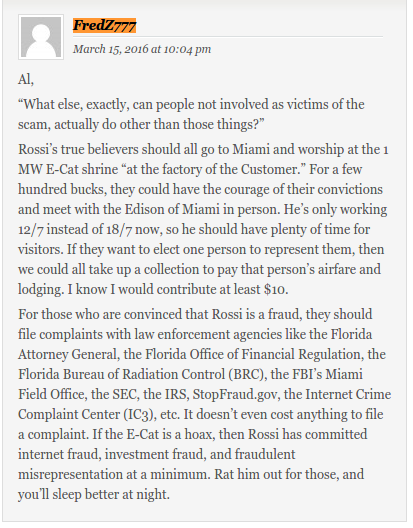 Which he seemingly also admitted he’d done in Oct ’15 … (this was before he turned incognito …. fredz777 ). It seems he took a liking for our Finnish “one-liner” friend tyy…. Watch out Timo 🙂 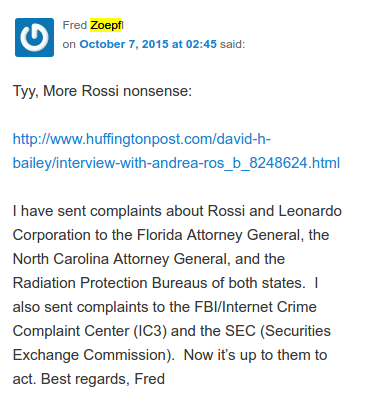 And this Fred guy really like to make threats. Slugger Fred punches in Europe and Australia as well. 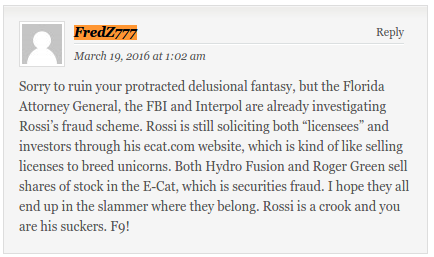 I do not believe he fails to make serious criminal accusations against Rossi in  every single message he produces. It’s simply amazing.

What it boils down to is Fred Zoepfl being the human manifestation of the hypothesis I wrote about a couple of days ago – at the time personified by Dewey Wever. Fred however seems to be playing the same game on a somewhat other level, I guess feeling protected by his “secret” handle.

Here he starts to elaborate on the IH strategy for the first time. Remember this is actually before the complaint. Note, that he’s starting to play the Darden Vaughn ignorant fools game. How should these stupid business men be able to know they were conned? 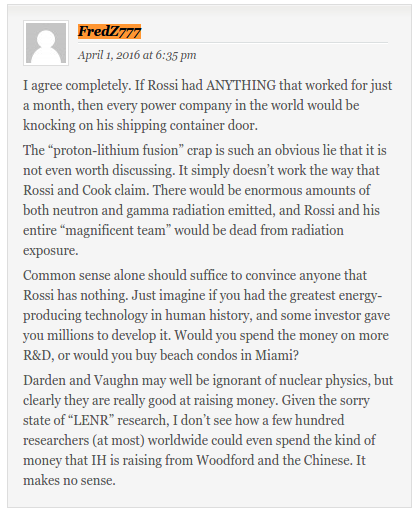 Then came the complaint … And look. Jaws drop … He says it plain. No need for any analysis. 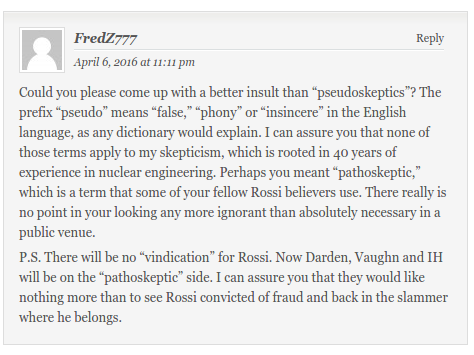 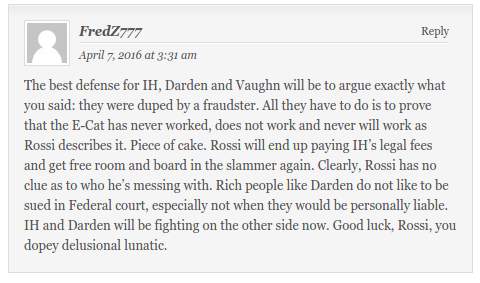 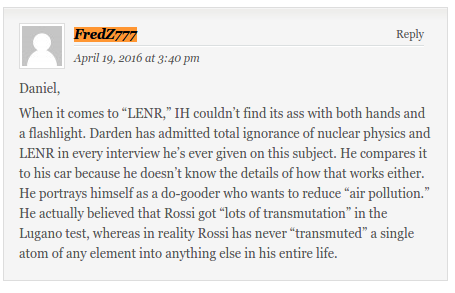 And to prove is genuine LENR hatred that goes all the way back to 89.

Another proof of IH involvement comes when Dewey Weaver is introduced. After knowing intimate details on almost everything connected to IH, Rossi, the complaint etc, he FAKES not knowing who Dewey, the diversion hitman is. Wow! Amazing. Is this for real?

The Fred goes on to play Darden as the fool according to the script he is assigned. 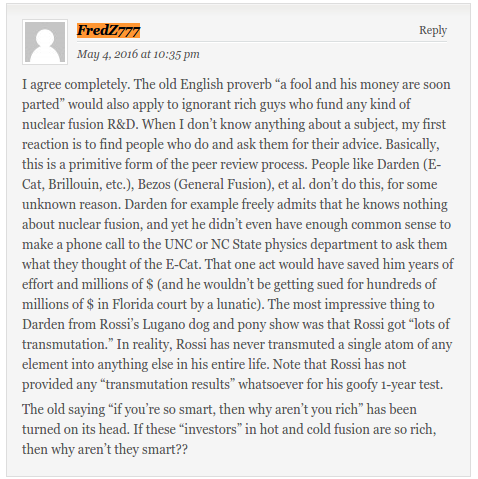 Reading all these comments. I’m baffled to the core. It looks like IH assigned a total wacko to do the real dirty networking for them. Dewey Weaver comes out as a really nice guy in comparison. The quantity of libelous and defamatory statements are simply mind-boggling.

Then something happens on or about May 11, and fredz777 transforms into “Linkin Rowed” instead, continuing according to the same script until May 23 when he dissapears. Not without som additional punches on Penon, Jed and Italians in general. 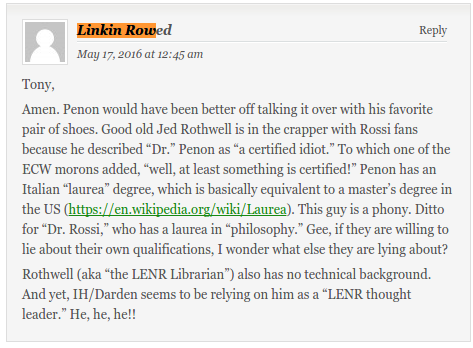 I leave you with this final quote for today where he bothers to making threats connected to Rossi visiting Sweden.

That is enough for today I think. There will probably be reasons to come back but I’m getting a bit tired …

13 thoughts on “Meet Fred Zoepfl – the Secret Weapon of IH/Apco or a “Physicist” Malfunctioning?”