I’ve been reiterating the IH PR letter and it is obviously extremely carefully worded aimed at several entities. As I wrote earlier, it’s i a broader sense directed to the overall community to raise LENR credibility and to fend of the pathoskeptical cult in particular.

But there are more to it. As I said, this paragraph gives credibility to earlier third party tests, ie. the Lugano Report team, but also refers to the present 352 day ERV report. They want somebody to know that they are in control …

We value credibility through sound LENR research. That’s why any claims made about technologies in our portfolio should only be relied upon if affirmed by Industrial Heat and backed by reputable third parties who have verified our results in repeated experiments.

And I believe that this somebody could be very specifically Rossi/Leonardo. Because no one is even close to benefit as much from the ERV report as Rossi and Leonardo. This IH knows.

Following the JONP blog it is clear that Rossi is NOT in control of the EVR. He does not decide if and when to release it. Rossi has been very clear on that he is now working for Leonardo, not IH. He has also been clear on that Leonardo plans to start manufacturing in both US and Sweden. 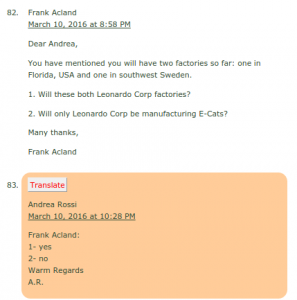 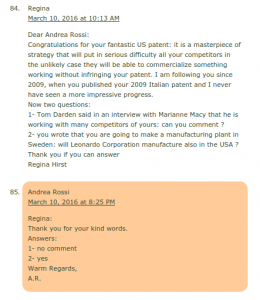 And he is also clear on that, even though he knows the result of the test, his credibility is limited compared to IH. 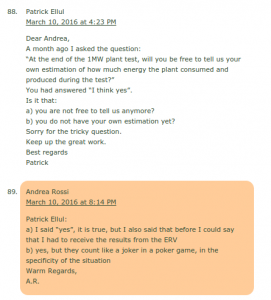 IH knows, that even though they might benefit from a release (or maybe not), it comes with a serious downside; loosing control over the Rossi know-how, which is as close as IP as they have. Rossi on the other hand clearly boosts his plans to work with Hydro Fusion building a factory in southern Sweden. 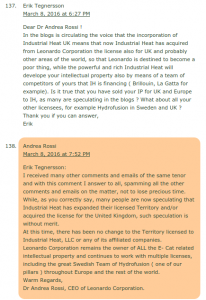 So we have a standoff; Rossi has the IP and wants to pursue other goals than spending time in a container. IH has the credibility and controls the report. They are negotiating …

Putting it all together I believe it looks like this:

IH are holding back because:

It makes business sense to me. Hopefully Rossi, who benefits the most from a release and is in the loop can put enough pressure on IH to release it anyway. A summary would be nice 🙂 Actually I think less is more in that case, leaving less for the pathoskeptic cult to fantasize about.

11 thoughts on “Will #IndustrialHeat choose Not to Release the 352 day 1MW #LENR report? In that case, Why?”