There are indication that this presentation is older than Oct ’15. That makes sense since the COP they are selling are lower than would have been the case half way into the MW test. Actually, if these slides are from late 2013 it could be even more important since it was during shortly after the MW reactor tested in Ferrera (May ’13) was shipped to Raleigh (Aug ’13) and during the time when the one year test should have started, but IH “failed” to find somewhere to put the container!!! Really makes you go hmmm…, about IH failing to do this and at the same time having time for a sales trip to China selling the COP 3-20 reactor …

Got a comment from “Willem” refering to this presentation made in China. 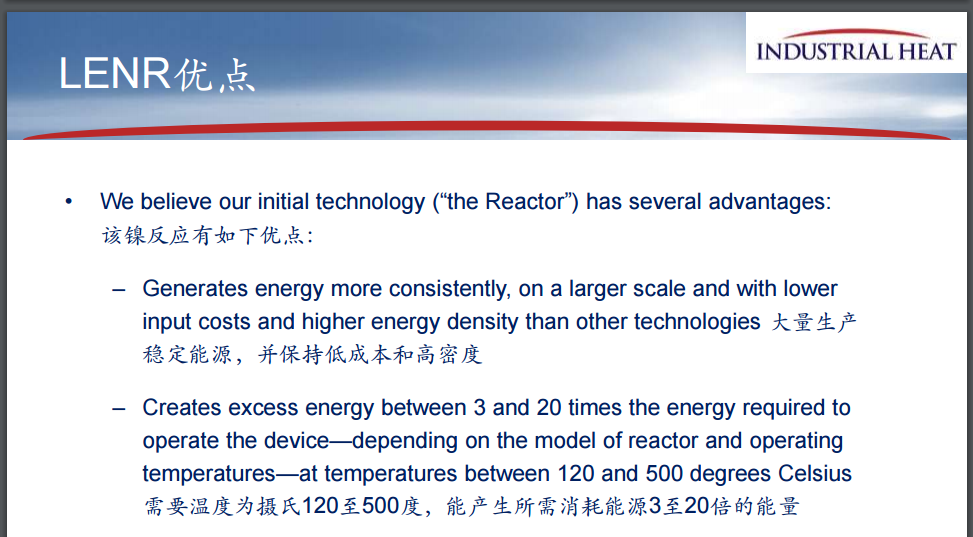 The ever cautious Darden starts the claims on p.8 with the proviso ‘We believe…’. A Chinese friend tells me that in the translation there is no such proviso at all. The Chinese text says literally : “The nickel reaction has the following advantages: …”. The “We believe bit” isn’t there at all.

To me this points clearly to Darden et al,  being very very confident on the Rossi technology being a real deal and having the bulk of IP. At this time they probably had all the IP Rossi supplied after the initial validation test

Also worth noting is (even more since this was before Brillouin was contracted):

From this, it is not far fetched to conclude that IH was only interested in the IP and were NOT planning to pay Rossi the $89M, since having the IP and a failed MW test would be the superior business outcome for IH. It would have the extra bonus of “killing the inventor”, but still having him in a IP leash (license agreement). From a VC point of view this might sound like good idea – from an ethical point of view – of course Darden et al, should be summoned by their maker and punished accordingly …

Luckily for Rossi IH did not pay, and by that time he was prepared. And IH was also totally busted by the complaint which puts the license agreement in limbo, and Rossi is now free to pursue other more important goals. He still have some unique operating skills the get COP~50 and he has the QuarkX. As you know, this has been eating the Weaver alive since when he started to realize they were being left with close to nothing.

And from there on you know the story (Weaver Dunghill link)…