Damage control is not working out for Dewey it seams. He now suffers from some kind of hallucinogetic paranoia – and the object of his melt down appears to be …. me.

Finishing it off with another hidden threat – Dewey style.

If this is not a sign that I hit the nail on the head. Then what is?

IH investors are “most courageous folks on planet earth” …

Well, maybe the investors of Woodford Patient Capital Trust will not like the 9% loss they will be facing when the Dewey “planet saver” turns out to be nothing but toilet paper IP… And added to that – they will soon also realize what could have been, when they see the progress being made by Rossi and the E-Cat IP that IH so epically failed to handle.

Looks as if Dewey Weaver is increasingly worried about the action of everyone in agreement with Rossi. So he is starting to make little threats again (As the Zoepfl did some days ago). Now including any employee, partner or I guess anyone in connection with Rossi… Creepy guy…

In his above comment he also states that IH didn’t pay Rossi because he didn’t fulfull his part of the agreement – ie transfer of the full Doral IP (which made the earlier IP that Rossi did transfer in exchange for $11.5mn – worthless). This makes it clear that the only paper of real value here was the license agreement which involved all future development of Rossi E-Cat IP. And EVERYONE knew this. But at the time Rossi was in on NDA and couldn’t tell – so he had to sue to get out. Dewey more or less confirms this in an earlier post:

Dewey is probably right here. At this time Rossi knew IH would never pay him (or Cassarino, who should have been paid $40mn as well, for that matter). IH however was probably going to try and negotiate some deal or payment that kept Rossi on NDA but put FUD on the Doral test – but allowed them to distribute IP among their other share holders and researcher.  And then take on more investments and finally maybe an IPO. This was their IP troll business plan. They never planned to sell energy. Thay only planned to sell IH stock – as the lawyer business sharks they are.

They should be. And guess who they are blaming for this total failure. Darden et al of course, who else. By so totally mismanage the investment in Rossi and the E-Cat he will probably end up in the history book as the worst business man ever.

As late as September 2018 Woodford Funds increased the value of their Industrial Heat holding by 357%. Reason was said to be that Industrial Heat had raised money from other investors at that valuation. Since Woodford has a 5% share of IH and their holdings are booked at GBP 200 mn the total value of IH shoud be about GBP 4bn.

IH is not really a negligable position in Woodford Funds; it’s 9.7% of the PCT fund and 2.3% of the EIF fund is serious business. A total writedown would be somewhat bad. 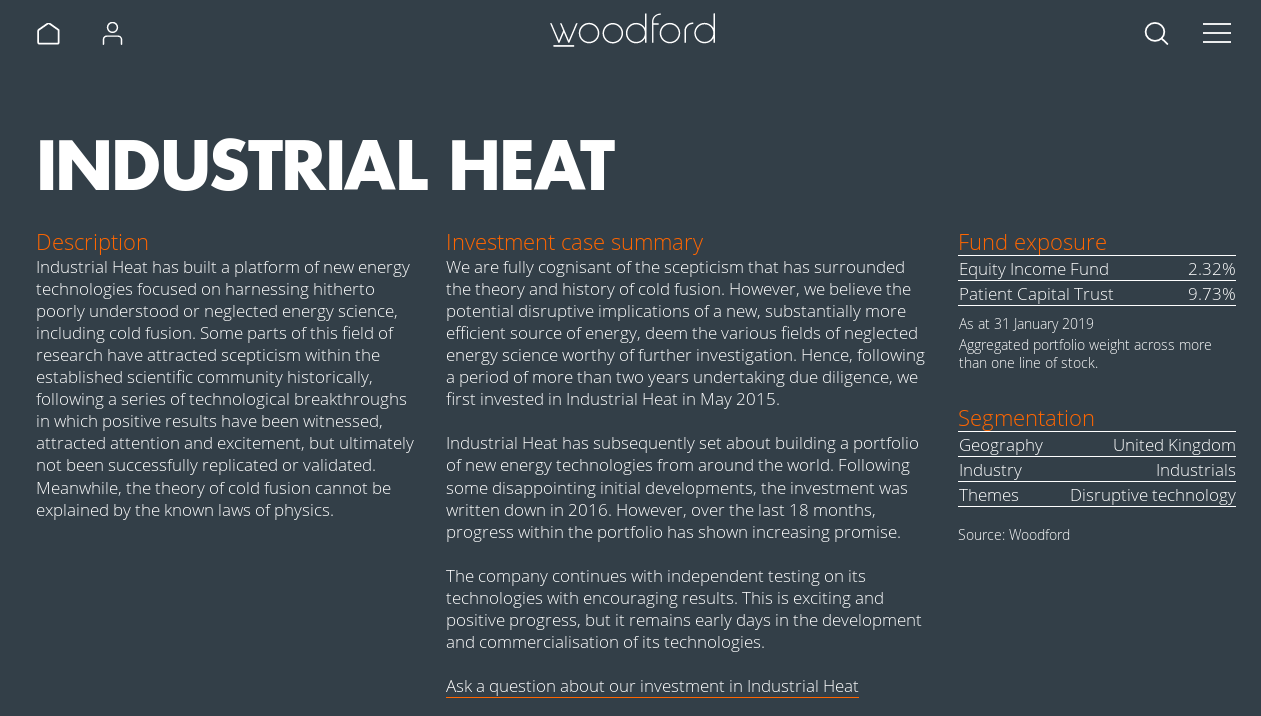 And what could possibly be worse than Rossi succeding with his E-Cat SK HaaS business? Absolutely nothing. IH would in that scenario instantly be worthless. All they have is some toilet paper IP at least 5-10 years behind what Rossi would already be selling. They will be toast.

So if you own anything in the Woodford PCT fund (Patient Capital Trust), you are looking at an >9% loss only straight away, since Industrial Heat is possibly worthless.

No wonder we’re seeing increased activity on the interwebs. As I noted yesterday they pulled mad dog Fred Zoepfl out of his dungeon to go bananas in the Youtube comment section.

And Dewey Weaver is tireless in his aggressive quest on LENR-FORUM – together with his team of trolls.

It’s all damage control in panic mode. Maybe Woodford is starting to realize exactly how badly Darden, Dewey et al fucked up? The ongoing discussion on LENR-FORUM  about Darden denying to return, or even sell back, IP back to Rossi prior to the lawsuit is a sign of this development?

Also interesting – in this new light – is the way Darden et al behaved when bringing Woodford to the Doral plant –  at the same time they knew they were having a fall down with Rossi – but didn’t tell them (actually they tried to suppress it as Cassarino testifies – “dont make any waves” etc) … So we can only guess in what way they have been pushing their other toilet paper IP after that. (here is a list of some IH IP) Have they been honest about it, or about the Rossi failure?  … Your guess …

So that triggers the question. What are the IH choices? Of course they now engage every possible resource they got (even Fred Zoepfl) to discredit Rossi and they will do anything to stop him if they can using legal and semi legal means no doubt; like talking about LENR certifications whatever that is etc. etc.

And then we will never know where the rest of the money went. I mean Woodford invested $50mn. Some $15mn went to Rossi and the JD lawyers. They never paid Cassarino. They paid the other researchers peanuts and stocks probably. So there shoud be about $30mn left, right?