I know first hand from very reliable sources that themselves have visited the Rossi/Industrial Heat E-Cat customer that the plant works very well. This has been verified both by measurements made by the customer and by significantly reduced electricity bills. The plant seems to be able to produce heat from electricity with a COP in the range of 20-80 depending on the level of self-sustain-mode applied. I guess that is what Rossi is working on right now.

This is a good day!

I made a quick graph that shows cftc.gov data on producer and swap dealer positions, in relation to the WTI crude oil price. As you can also see, I made som comments:

There are two distinct strategy changes in the BigBank&Oil trading pattern occuring first in september 2014 when they stopped buying the price decline, and secondly in march 2015 when the actively intervened and started buying again at $40-$45 range. Of course these might mean nothing, but it seems that they for some reason in late september decided to abandon their previous strategy and move the oil price target range from $80-$100 to $40-$60, where they will probably keep it from now on until further notice …

It’s also interesting to notice that since they had such a huge short position to begin with they’ve pocketed a staggering $30 billion in profits since july 2014 of which $8 billion is realized and the rest is still on the books! On April 14 they were still short 377 thousand contracts, so the certainly don’t believe that the price is going up anytime shortly … 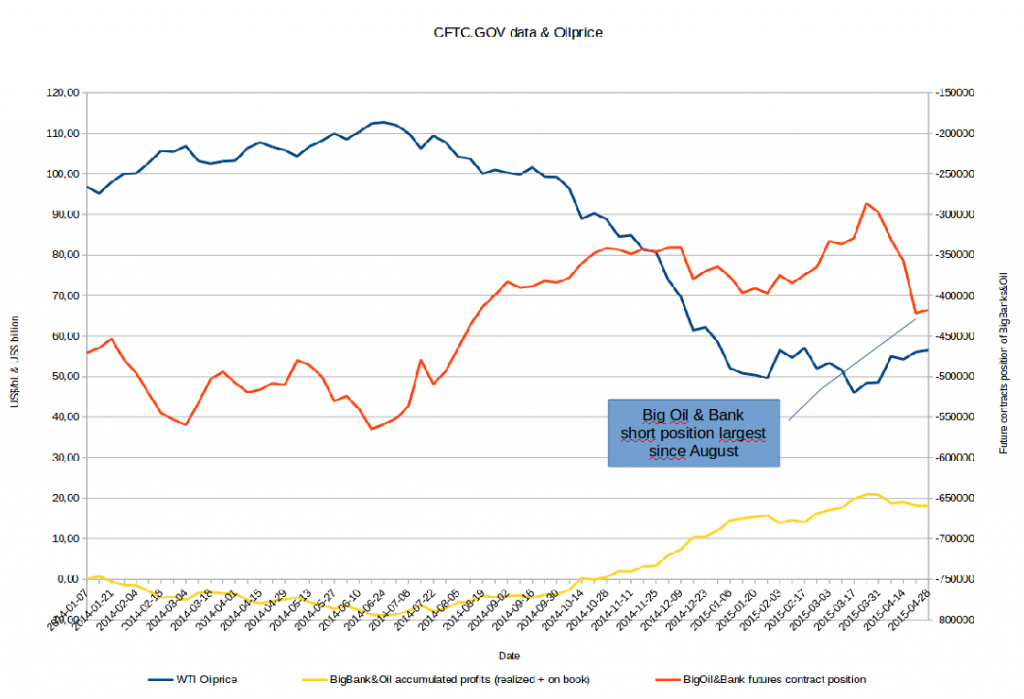 Marianne Macy of Inifinite Energy Magazine has done an extensive interview with Tom Darden of Cherokee Fund and Industrial Heat.

Some qoutes that is of great value when analyzing the business and personal side of the Darden / Rossi relationship:

Oh, yeah. I’ve been the primary funder. I think there probably are a lot of people out there like me. Clearly there are. You read in the newspaper about Bill Gates

We’ve seen a number of tests and we’ve had a lot of people looking at tests. Of course outsiders have looked at
tests. I think particularly the transmutation data is very compelling. I felt very good about that, better than any outlet of test data I’d seen. We’re not interested in or insistent upon perfection from a scientist. What I mean by that is, stuff might work. Stuff might not work sometimes. I don’t find failure to be very depressing. As I said in my talk, I’m a pilot; if you see any airplane fly, then airplanes fly. If the next time an airplane takes off it crashes, you don’t say, “Airplanes don’t fly.” You might say “That airplane no longer flies” or “Often airplanes don’t fly.” But you would say, “Airplanes fly.

We’ve seen some really good stuff. We want to support
Andrea in his research however we best can.

He is very rapid at iterating. He is constantly coming up with new things, “Try this. Try this.” I think that’s a good thing. I like that attribute. I think it’s society’s problem to say to someone like that, “Ok, stop. Just work on this. Make a hundred things like this and let’s finalize something.” Well, it shouldn’t be like that. He should be able to do what he needs to do.

Rossi is a smart guy. The thing I’ve always been interested
in Andrea is how intensely theoretical he is. I’m not smart
enough to know what theories are right. People have a visualization
of things they can’t see. I have no earthy idea if
what they are seeing is correct. I had assumed he was more
of an experimenter, a tinkerer, trying this and this and this,
in more of a random fashion. But not at all. He is laser like
in his attention He is very theoretical, very knowledgeable.
He’s hard working and driven and we’re pleased with the
investment. In any given setting if you are sitting with
Andrea Rossi and there’s a down moment, in most of those
situations he’ll be reading a physics book or physics paper.
At any given moment he has five minutes between when he
is doing that and doing that he’ll be sitting there reading.
People see him like that in photos and think it’s staged. It’s
not!

Here is the downloadable pdf:  DardenInterview