The reason for the recent plunge in oil is of course OPEC stating that they are not reducing production. However, speculations on the reason for this descision are still obscure, mostly they resort the punishment of either Russia/Putin or the US shale industry.

Obviously these entities will suffer from a $68 oilprice and even more so a $60. And when the oil drops to $30, the Saudis will be the sole suppliers.

But, fact is that Goldman Sachs, JP Morgan among others have been extremely well positioned for this move since 2011. Why is this fact not mentioned more often? Their position in oil futures are published every week… Strange.

The interesting question is of course if LENR has anything to do with it? Well, we know for sure that Statoil in Norway knows about LENR and are investigating it. I actually have many hits on this page from Statoil owned IP-numbers. We also know that the Lugano Report has been downloaded more than 120k times only from this page, even from countries like Qatar, Saudiarabia and Venezuela. Not to mention Russia and Ukraine beeing among the top downloaders.

So this is what the black swan look like today… 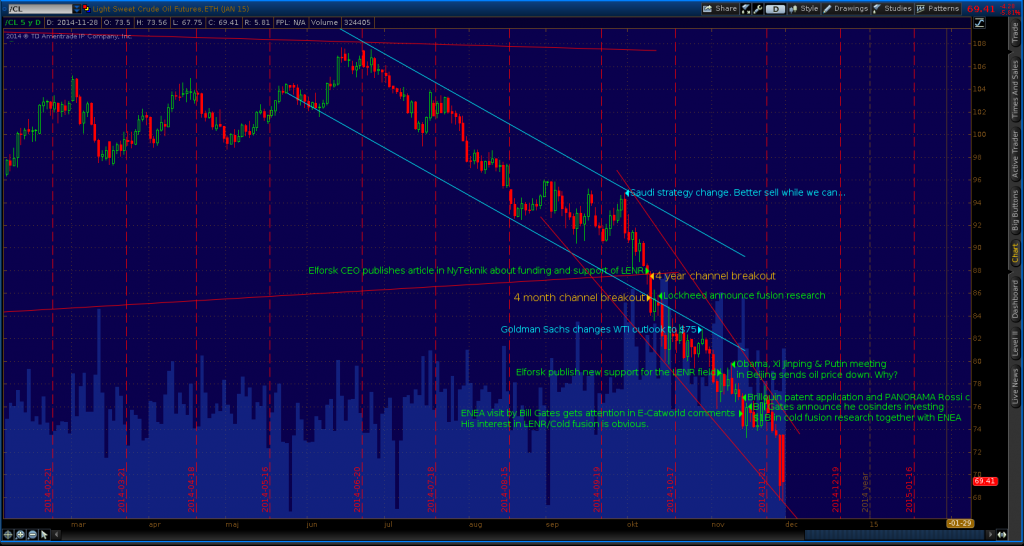 Well, nobody really influential talks much about LENR or Cold Fusion but they are certainly interested. Yesterday news that Bill Gates is discussing it in Italy with ENEA is one inidicator. Also yesterday news about the Brillouin patent application seems to have som importance, as well as the Panorama coverage of Andrea Rossi. Lets have look on what I believe to be the prime indicator of LENR – The oil price. People with influence might not talk much about it, but they sure as hell act on it (and have done so for some time)…

Here is the complete LENR (Cold Fusion) / Oil price timeline. Also note the influence from the Beijing meating with Obama, Putin and Xi Jinping on November 10th (as reported on CNN): 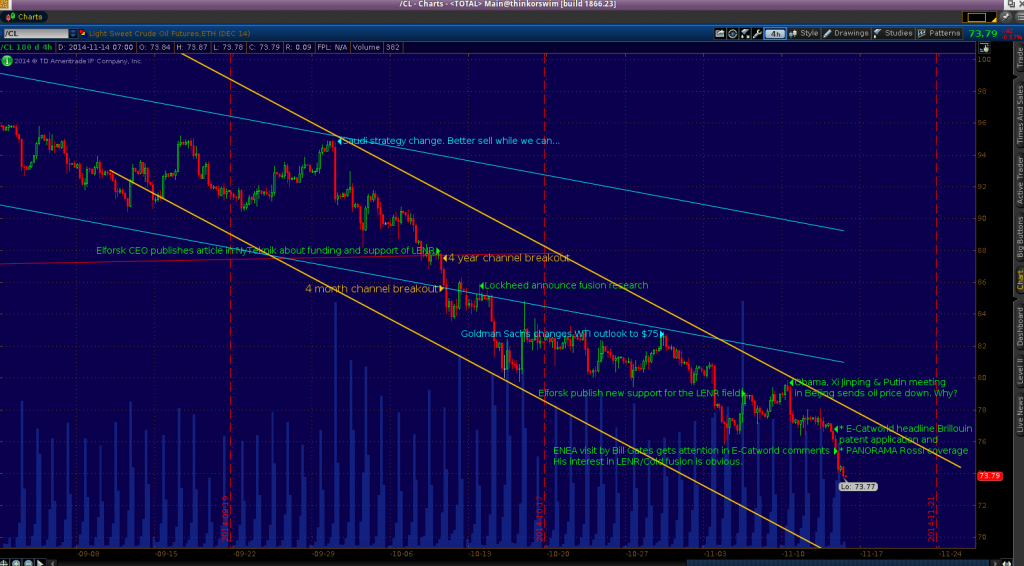 Lets just accept it. LENR is happening. Access to energy will be a non issue in the future. It will just be there, for free or really really cheap. We will be cold, warm or whatever we like at the moment, and no one on this planet should have any problem to satisfy physical needs like food, clean water, etc.

If we want to. Or actually, if the ones in control want to…

Unfortunately, our “political” problems will still exist. These problems comes from our aim for what Maslow coined “security”, as the second step in our hierarchy of needs.

Since we left our lives as hunter-gatherers some 20,000 years ago this has been a serious issue. And the life blood of the politicians and/or rulers/violators; i.e. the people that trade your freedom for security.

Of course, this is not bad per se. But you need to get the pig picture first to understand.

About 20k years ago we started to build societies larger than the clans/groups that was the way we have lived since we started to use only two legs to move. This change made it possible for some people to control other people in a completely different way than upp to that pont. At that point we started to organize in a new way. We no longer lived on what we gathered that day (or a slightly longer time, but less than a year). POWER become a new value besides obviuos values like food and water. It also become possible to live by loot (except for short term), or by use of or threat of using violence. The rise of politicians, kings, emperors, tsars, priests and organized crime was a fact. They all sell the feeling of “security” in exchange for your “freedom”…

This kind of society has lasted to this day. Very much so.

Thing is that in broad sense nothing about this will change, even if everything we need to live a physically healthy life is available to everyone all over the planet. This is mainly good of course. EVERYONE will be able to satisfy their basic needs, unfortunately the POWERS will still rule and control beeing as arrogant and aggressive as ever before at some places.

The difference is that this ruling will not have anything to do with physical values like energy, food and clean water anymore. It will have everything to do with “influence”. And inluence these days are digital. It’s about controlling information and knowledge and ultimately the exchange of values.

Our collective hope in this scenario is decentralizing. Only decentralizing will prevent the current powers to keep and gain even more control over us humans in the name of our percieved “security”.

This is where LENR comes in. It is decentralizing energy and everything that comes with it. Even your defencive powers (think about a personal lifetime drone or whatever).

So when the Powers loose control over of this important physical aspect, only our values are left for them to control. Do you see the pattern?

In this context it is not surprising that values even further up the Maslow hierarchy is gaining power, like belonging. Be it nationalistic or religious values, We want to be part of something and we often value this feeling higher than our freedom.

So, the powers will sell us both percieved SECURITY and VALUES in exchange for freedom. And we will buy it. Decentralizing of physical security will make a huge difference for a lot of people, but an ever increasing number of different values will be marketed.

However, and here comes the core of my abstractions, the main control mechanism is the EXCHANGE of values. And in our world this is about a simple item called money (and the control and printing of it, done by the government sponsored banks).

In Sweden, where I live, pretty much every single transaction of value I do is controlled/monitored/traceable by the powers. I like to pay cash sometimes just for the fun of it, but mostly I don’t care. I use my bankcard, I use the Internet bank, etc. Out of convenience. Also my beloved smartphone is controlled/monitored/traceable by the powers (everything seams to be stored in the Google/Apple/TPTB cloud these days unless you actively force them not to…and it is not uncomplicated…). So, they know where I am, and what I do, almost all the time…  And most of the time, I dont care.

This is why banking and surveillance is important. It is certainly not about savings. It will not even be about debts in the future, even though this has been an important tool gone out of control. It is all about controlling/monitoring/tracing transactions/movements in order to market values. This is control. This is what Putin does controlling media the old fashion way in Russia, what GS/JPM/FED/etc does in the US and what our Swedish government subsidized/secured banks does here, maybe more than most places.

I will stop my ranting here, leaving you with my conclusion. LENR has the potential to bring us forward to a society we were genetically made for. We will not need to hunt and gather for our physical survival like we used to, but we will need to do it for our psychological survival instead. We will of course come to different conclusions depending on our personalities. For some of us being controlled actually equals belonging. And that is ok. But others don’t feel that way at all…

This is why movements (as well as LENR) like a free transparent Internet, open source, cryptography and crypto currencies are important.

Think about it. Thank you.

I guess we can speculate about the reasons for the downward move in oil. Maybe US is trying to punish Putin/Russia, maybe the Saudis is trying to punish the the shale oil/fracking business in the US, maybe it’s as simple as the demand/supply ratio falling… Who knows,…

But maybe the reason is that enough people with in power KNOWS that LENR is real? Maybe Goldman Sachs and JPM knows? Maybe the Saudis knows? These people are certainly paid a lot to know about these things.

And keep in mind. The swap dealers (GS JPM etc) are still short ~400k contracts in crude on NYMEX/ICE. This position is still very much on… Why? 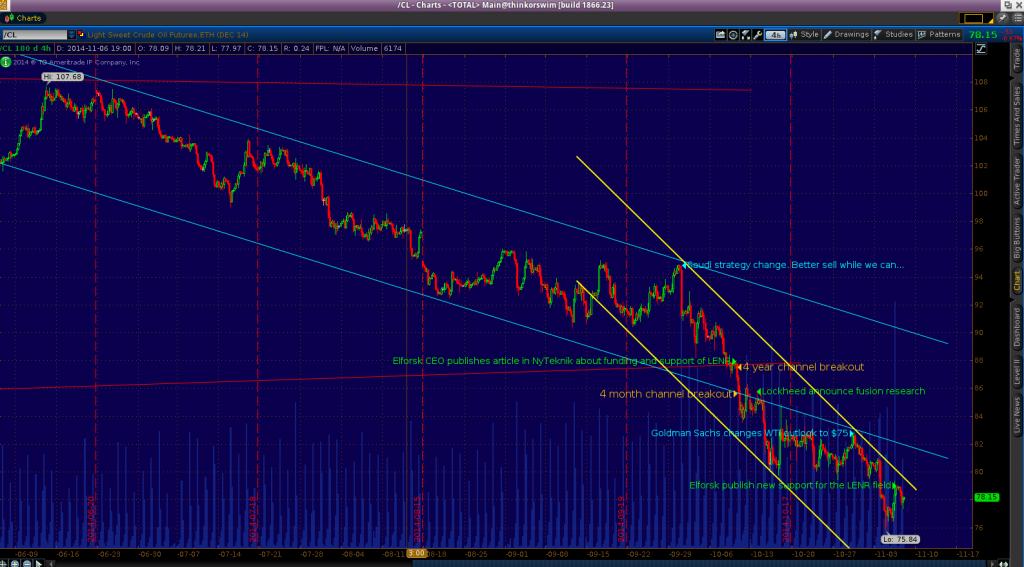 Here is the timeline.

From the CEO of Elforsk, Magnus Olofsson:

A small group of swedish scientists are deeply engaged in trying to understand the underlying physics. Thereby Sweden has a unique opportunity to be a prime mover in research and development of the emerging LENR field.

This is a game changer and really good news.

Obviously a group of scientist, probably in Uppsala, will be openly financed to research the the physics of the E-Cat. Maybe Pettersson, Höistad and Tegnér is heading the research engaging young brave talents like Gullström to think outside the box to solve this once-in-a-century problem.