(edit 141029: It seams that Ekströms was trying to be ironic. Allthough he accepts Gullströms calculations, he doesn’t accept the E-Cat since there was no radiation)

On the swedish forum Energikatalysatorn.se well known E-Cat critic Peter Ekström of Lund (who together with Pomp, Ericsson, Håkansson recently critized the ITPR2) made a comment. He also adds that:

“The Nobelcommitee will have an easy job next year: Rossi and Gullström”

I guess this last sentence could be interpreted as som kind of weird irony, but compared to Ekströms 3291 other comments on the forum this is one of a kind…

So what are we talking about? Of course the article released by doctoral student “Carl-Oscar Gullström” titled “Low radiation fusion through bound neutron tunneling” . At this moment it has already been downloaded 3882 times, which I believe is pretty good for a nuclear physics article.

The story gets even more interesting when realizing that Gullström is working in the same department as professor Bo Höistad of the ITPRs. I believe this is really good news since it means it is actually considered ok to study these phenomenons by young students in a physics department of the major university. I believe there is more to come…

As a sidenote. Both Nickel and Lithium were discovered by researchers from Uppsala University; Nickel by Axel Frederik Cronstedt in 1751 and Lithium by Johan August Arfwedson in 1817.

As you might have noticed, I have been asking myself this question for some time. In my article on oilprice.com from march last year I presented the hypothesis that BigOil and BigBanks are already planning for this to happen. This might be so, or not, but fact is that the “swap dealers” are a collective short of 400k-500k contracts on the NYMEX and ICE crude future exchanges. This position was built during 2010-2011 and if we have a look at the chart for the period since, this is what we see. 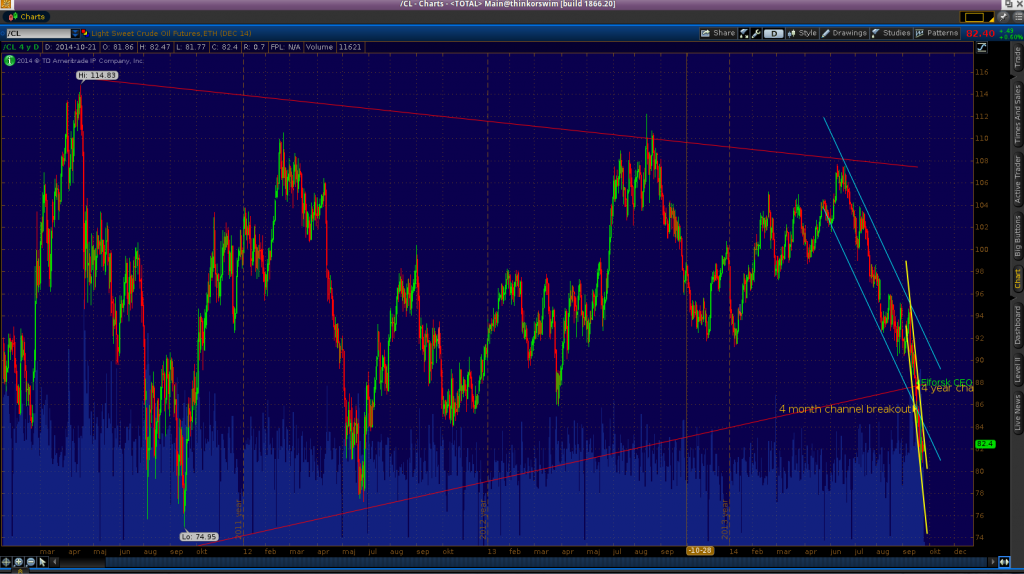 Since the BigBank/Oil strategy change in 2010, the oilprice has been stabilizing in a 4 year “pennant” aiming for a $90-$100 price range. Until October 9th…

Following previous price moves, staying within the “pennant” a resistance at $88 would have been expected. Instead there was a bearish breakout and the price even accellerated downwards breaking out of the 4 month channel into a new even steeper channel. The hypothesis is that these breakouts might have been initiated by Elforsk, who funded the LENR Lugano Report, when publishing an article Ny Teknik stating that they will keep funding and researching LENR. Looking at the chart below we can see that these breakouts occured within minutes (4year) and hours (4month) after the Elforsk event. 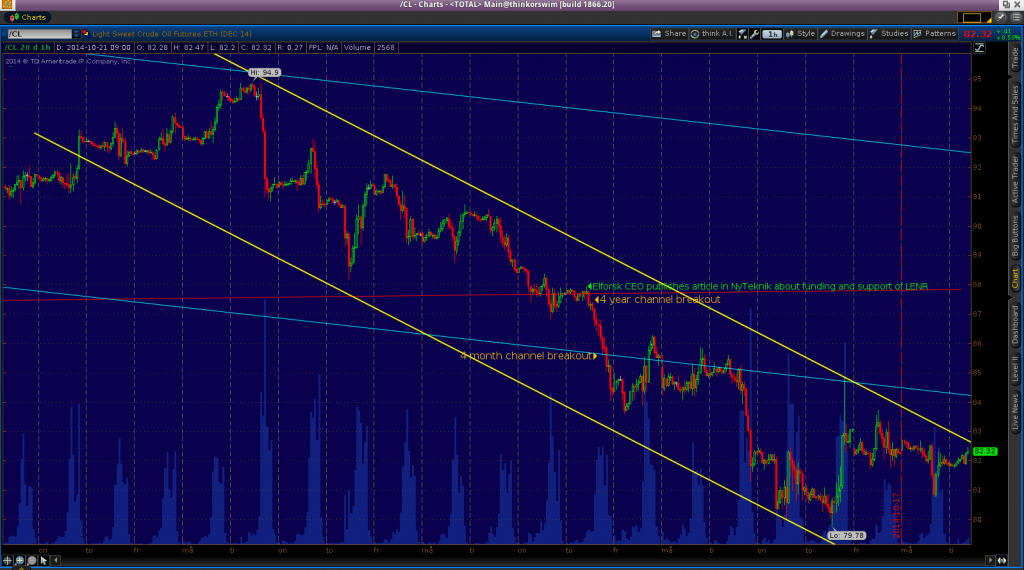 Of course we do not knew yet the significance of these events, but maybe, just maybe it is more than a coincidence.

Another piece of interesting information is the list of countries from which the Lugano Report has been downloaded. Summarizing from October 8th the list looks like this. 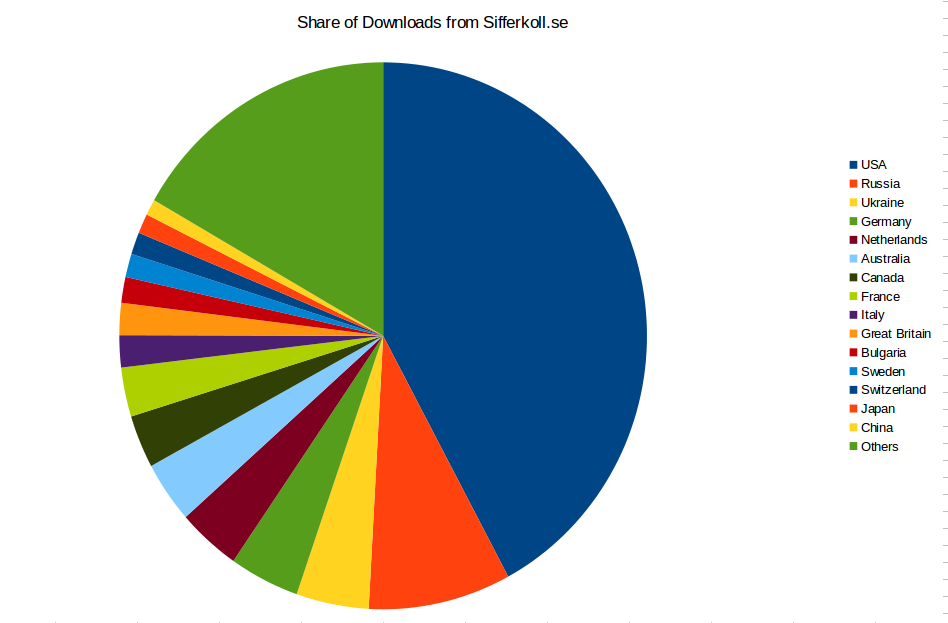 Both Russia and Ukraine in the top 3…

Until early this morning the report has been downloaded 86381 times from Sifferkoll. At the beginning US, Italy and Sweden was the top three downloading nations, but this has changed a bit since. Russia now being in a strong second place. Have a look… 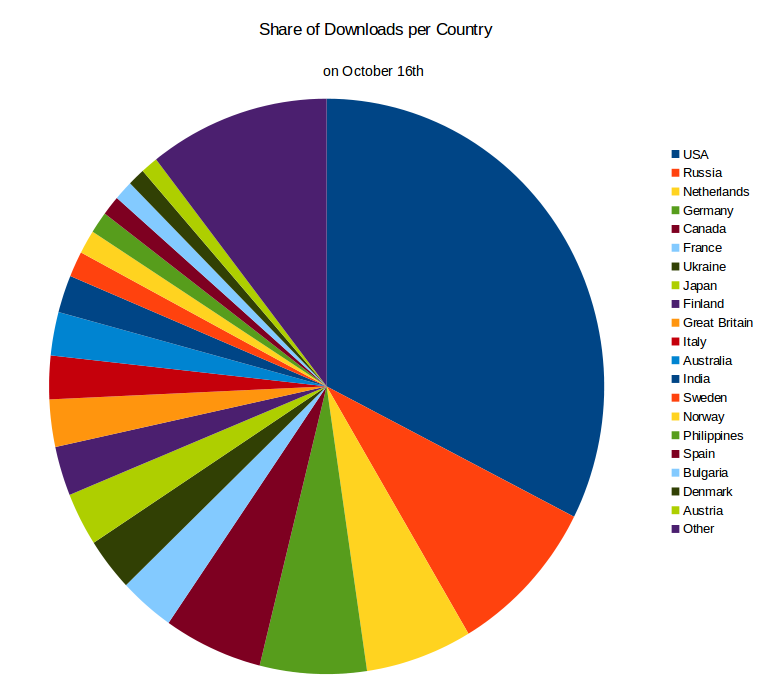 The swap dealers had a great day on the NYMEX and ICE today. Oil futures plunged again to lowest since june 2012. With a massive short of 400k+ contracts in crude they are up a healthy 1 billion dollars today. Since june they are up close to 10 billion. Congratulations!!! 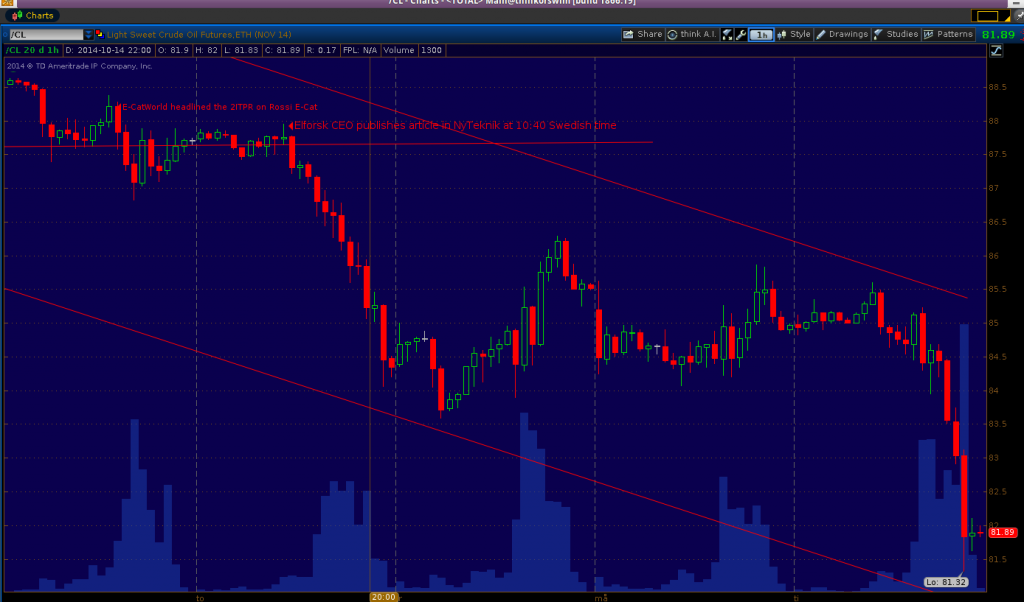 Here are som stats showing from which country the report was downloaded. 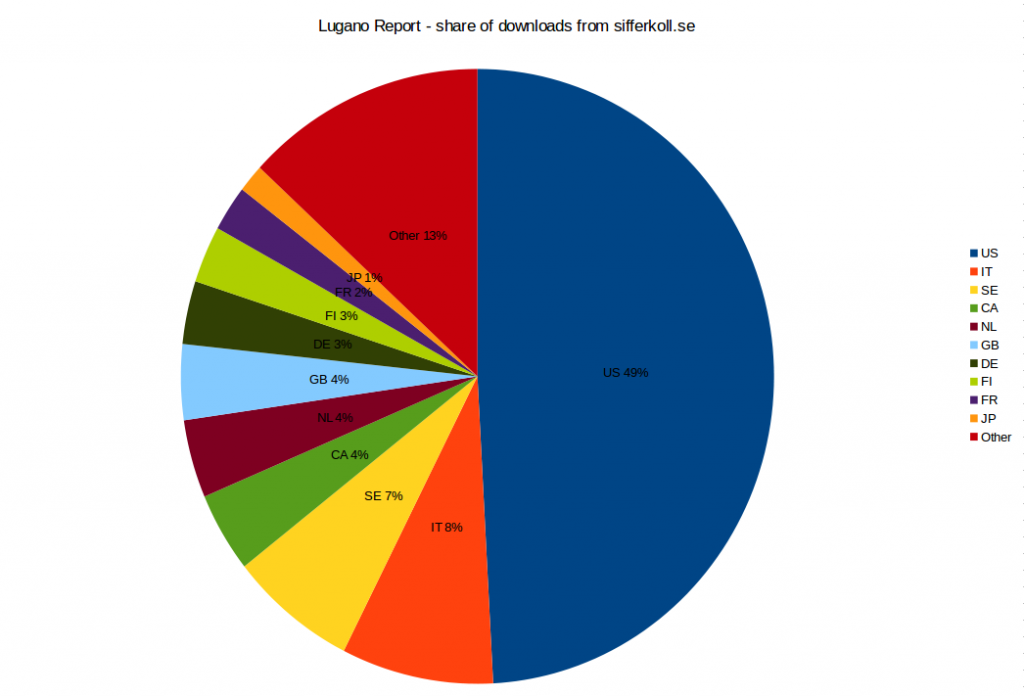 Latest download stats shows interesting data from referers and a new peak in downloads yesterday. Slashdot.org beeing in spot no. 1. Total number of downloads from sifferkoll.se by 3.05 tuesday morning 69367.

I made a quick graph of the Twitter data I’ve collected from the firehose, which is normally used to track swedish political sentiment but expanded to cover also LENR. This are the statistics until friday. Compared to the number of downloads made through Twitter links the data makes sense I believe. 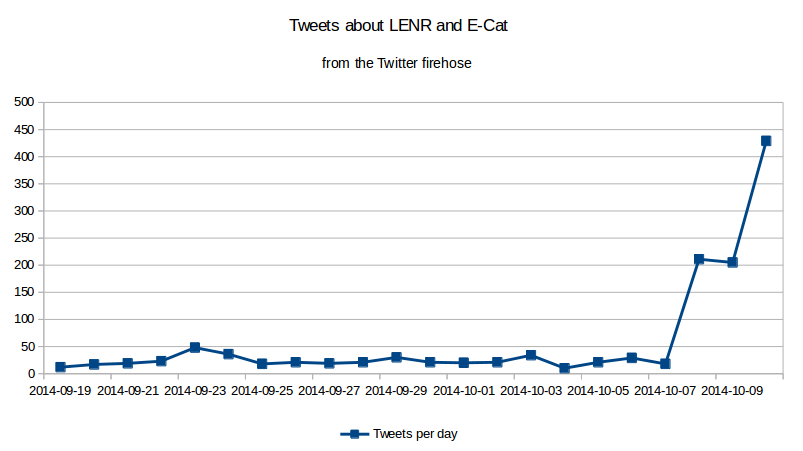 Since the report was published until 03:05 sunday morning the report has been downloaded 49259 times.

The following sites are the most influentual in spreading the news so far:

It’s not easy to comprehend, but I will try to be somewhat leveled here. As I always said, this is not a question of physics or science, but of pure psychology. So to cool down I’ll try to think that they actually feel the same contempt for the personality Rossi and other people that they don’t understand represents, as I feel for them.

Read this analysis (inventor vs. inspector) about the personalities involved. I think it describes in a clear way what is happening, now more than ever.

For them Rossi represents their highest fears since he threatens their world view, built on years of intense study of the ancient books of physics. They actually use ”ancient” as an argument in some weird way. And since something that ancient can’t possible be wrong in their mind their only conclusion is that Rossi commits fraud. However they don’t dare to connect the dots, that this also means accusations against Rossis employer and owner of the technology Industrial Heat. I believe this is to complicated, so they just leave it.

Being physicists it is also hard to believe how easy it seams for them to resort to circular arguments. In their world view there seams to be no way that what has been thoroughly measured and described in the report can be true, so they use those measurements as a premise and deduce their fraud conclusion, without any single indication to back it up.

I think it might be a good idea to remind my readers of an article I wrote for Oilprice.com in march 2013. The big banks are already short a massive 40 billion dollar in oil, while the pension and savings funds are taking the other side of the bet. My take is that the oil price will keep falling in a highly volatile manner until it settles at a price where only the easy access reserves in the Mid East are profitable. I guess somewhere in the $20-$30 range.

The stabilizing trend of the oil price in the $90-100 range supported by the big banks is broken. As shown by CoT data, swap dealers have continously supported falling prices with intense buying. It seems that this strategy is now abandoned. We’ll see. 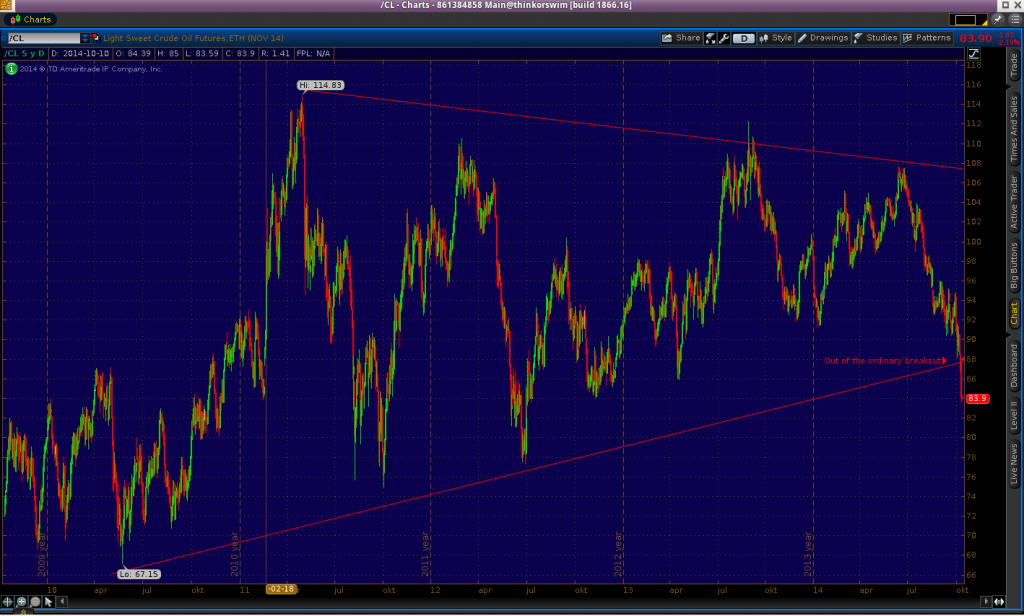 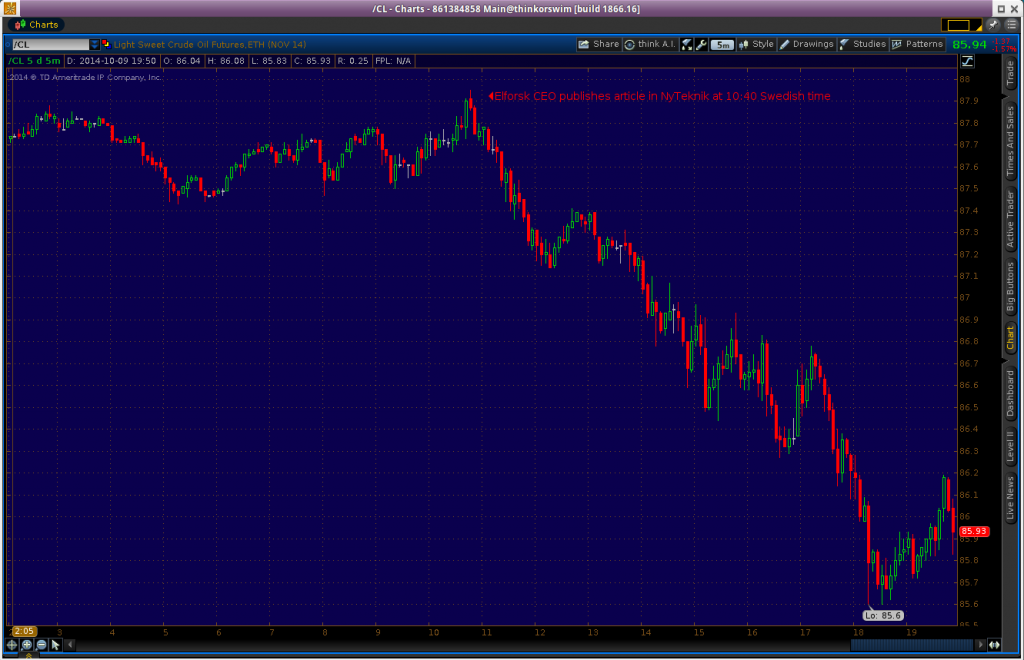 While looking in the logs after publishing the E-Cat report I found out that within minutes it was downloaded by an IP number owned by Blackrock. Within minutes after that oil futures started to fall and have stayed volatile since… 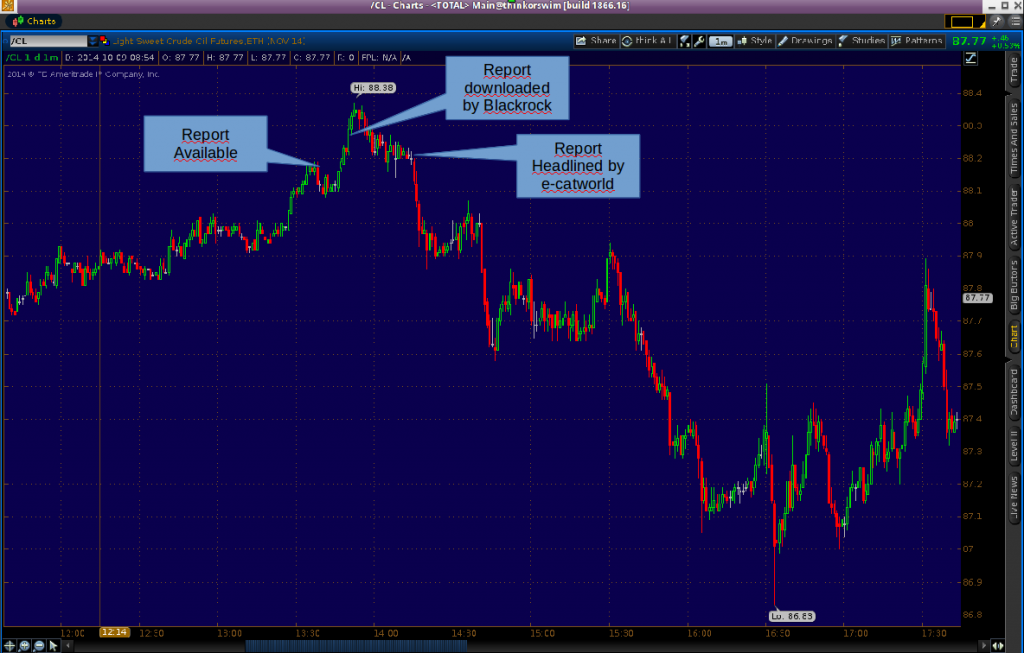 Apparently arXiv.org have put the second independent third party report on hold for unknown reasons (insert favourite pet theory here).  It shows an undeniable COP of 3,2-3.6 over a 32 day period and substantial isostope changes in nickel and lithium. Anyway here it is for those interested.

Any day now we will be able to read the long awaited Second Independent Third Party Report measuring the heat and analyzing the fuel from the E-Cat invented by Andrea Rossi.

Rumors are that it will show significant anomalous heat and to some extent also show which reactions that occur on a nuclear level. These results will be undeniable and the report will be backed by numerous researchers from several institutions worldwide

So, what does this mean?

It means that everything will change. It may take some time, but it means that most things will get significantly cheaper, since energy is such an important part in how we keep warm (and cold), what we eat and how we cook it, how me move about (fuels), and all other things we consume, etc. etc.

I would go so far to say that energy is as close we get to a “gold standard” for our storage of value (ie. the petrodollar). Everything depends on it.

So what will happen when we suddenly gets five times as much energy per petrodollar?

Of course we will consume more energy,but in everything we consume there will be a HR part, so we will also consume more human resources (ie. valuable knowledge), which of course will increase in value. The economic boom will be unparallelled. All food and water scarcities around the globe could be solved if only the local rulers allow it (unfortunately they will not) and the environmental challanges can be solved as well since so much of it comes from air pollution, etc.

The amount of petrodollars around will be the same, so in a classical sense there will be neither deflation or inflation. However the deflation of price in all commodities and products with a high energy content will be huge, but balanced by a equally huge inflation in the new scarcities with low energy content; like human resources, time in general, attractive real estate and other status symbols. Generated profits will be invested in new products like never before. And debts could be paid off.

What about the financial system then?

Since the investment climate will change due to possible high returns, the price of money will go up, which in turn will make it a better investment to pay off debts. There will be some kind of balance, but basically it means that the financial debt crises in EU, US and Japan can be solved due to lower costs, higher taxes and lower unemployment in general.

So are there any losers?

Of course, oil stocks will be valued at cash instead of possible future profits. So the owners of these assets will loose money. Mainly this means savings and pensions of taxpayers; fortunately the same ones that in general will see an even bigger upside. some people and organisations will loose power, like the “green” politicians that make a living out of environmental doomesday scenarios, and maybe most troubling, some governments that are dependent on exporting oil and gas for spendings. I guess Russia beeing the most scary one.