Last night it seems that maybe Fulvio Fabiani of Leonardo Corp. (Rossi, E-Cat, etc.) made a mistake listing the names of his employers on Linkedin. Beside Leonardo there was the recently funded (US$ 11 million in August 2013) Industrial Heat LLC of Releigh NC. What is even more interesting is that shortly after this was discovered the reference to Industrial Heat LLC was deleted by Fulvio! Have a look: 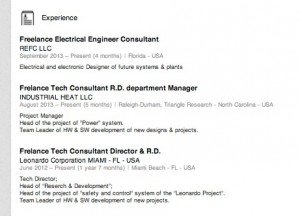 What is interesting about Industrial Heat is also the connection the VC company Cherokee Fund and their CEO Thomas Darden and senior analyst JT Vaughn who where referenced on the SEC listing of the Industrial Heat funding. Cherokee Fund have an investment portfolio with close to US$ 2 billion under management.

Anyhow, it will certainly be interesting to follow. Our analysis is that it kind of make sense in relation to all previous rumors and statements by Rossi. This is a good place to follow the development: ECatWorld

It’s been ten months since we published our report big banks short selling of oil: Why are the Big Financial Institutions Selling Oil BIG on Oilprice.com. Since then the report has been downloaded more than 16,000 times. And since then the big bank has continued to sell oil in a very consistent fasion.

Having a look at the latest COT report we see that the current short position in oil by the “swap dealers” i.e. JP Morgan, Goldman Sachs, etc. is about 552,000 contracts (ICE and NYMEX, futures and options, combined). cftc.gov CoT data

Here is a chart showing how they consistently keep selling. The chart also shows that the oil companies themselves have a neutral strategy since the beginning of 2011. 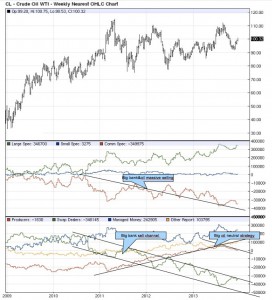 Our analysis is clear. The Big Banks are positioning themselves massively short in oil. At the same time Big Oil is no longer hedging themselves for a price drop like they use to prior to 2011.

This can’t be without a reason. Too much money is involved. The Big Banks have sold 750,000 contracts (75 billion dollars) since end of 2010. They know that the oil price will eventually plunge and they are not taking that loss. The taxpayer will, by owning Big Oil stock and managed money funds that are net long oil.